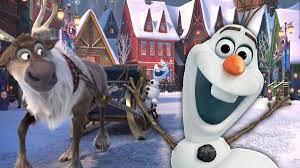 For the first time since 2013, Frozen hits the big screen again this November!

A brand-new Frozen mini movie is coming to cinemas, called Olaf’s Frozen Adventure! The film will be shown before the original Frozen movie on Saturday 25th and Sunday 26th November 2017.

Watch the official trailer for Olaf’s Frozen Adventure below!

It’s the first festive season since the gates reopened and Anna and Elsa host a celebration for all of Arendelle.

When the townspeople unexpectedly leave early to enjoy their individual festive customs, the sisters realize they have no family traditions of their own.

So Olaf sets out to comb the kingdom to bring home the best traditions and save this first Christmas for his friends!

Olaf’s Frozen Adventure is directed by Kevin Deters and Stevie Wermers-Skelton, produced by Roy Conli, and will feature original songs by Elyssa Samsel and Kate Anderson.

It’s in cinemas for one weekend only on 25th and 26th November 2017, and will be screened in front of Frozen Sing-along.

The news about Olaf’s Frozen Adventure is getting us even more excited for Frozen 2, which we can expect in November 2019!

Are you excited to see the mini-movie? Let us know in the comments below!

Playing: we got this together by cast of my little pony: the movie