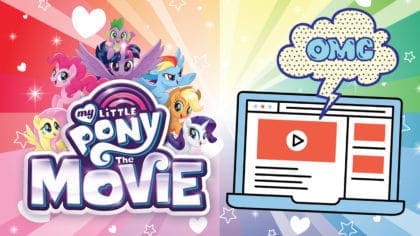 Hey Everypony! We’ve got a peek at the brand new My Little Pony: The Movie trailer and it looks totally amazing…

Here’s everything we know about the movie and you can even see the trailer for yourself, below!

Equestria is in danger when the evil Storm King invades Canterlot with plans to steal magic!

The Mane Six – Twilight Sparkle, Applejack, Rainbow Dash, Pinkie Pie, Fluttershy, and Rarity – have to embark on an heroic mission to save the world…

Armed with determination, loyalty, and the magic of friendship, the ponies face their biggest challenge yet.

Along the way they learn that heroes come in all shapes and sizes and that there really is no force stronger than the Magic of Friendship!

My Little Pony: The Movie is in cinemas nationwide on October 20th!

The film has a really famous voice cast including Emily Blunt and original songs by Sia!

Check out the trailer below!