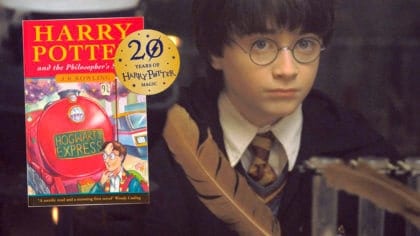 It’s been twenty years since the very first Harry Potter book was released in shops!

The books became bestsellers around the world and even spawned movies, spin-off series, a play, clothes and games, a theme park, and loads more!

In it, Harry learns he’s a wizard and heads off to Hogwarts. He meets Ron and Hermione and learns about the evil Lord Voldemort. He also gets sorted into Gryffindor by the Sorting Hat!

She wrote the first book at a café near her flat during the 1990’s. She got the idea on a train from Manchester to London and began writing Philosopher’s Stone that very evening!

The people who published the book paid JK Rowling £2,500 for writing the first one, which isn’t a lot of money. They liked the book but thought it wouldn’t sell very well. How wrong they were!

To celebrate Potter turning 20, an exhibition is opening at the British Library later this year. It will run from October 20th until February 28th 2018 and will feature early drafts from JK Rowling!

It will also look at the history of magic around the world, showing stuff dating back hundreds of years, books about magic and related objects!

There will also be a rare first edition of the book filled with personal notes and drawings by JK Rowling.

Click here for more information and to book your tickets