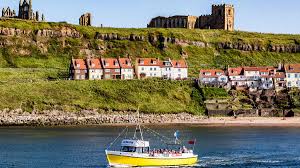 Whitby is preparing to push the boat out for one our area’s most iconic figures by holding a weekend-long Captain Cook Festival.

To mark 250 years since Captain James Cook set sail on his first voyage of discovery to the South Seas, a festival of celebrations will take place from July 6 to July 8!

Giving a feel for life at sea in the 18th century, two tall ships will sit in Whitby’s harbour especially for the festival and will be free for visitors to access.

Maritime adventurers can step back in time and climb aboard the Spanish hand-built tall ship Atyla to experience life at sea, and re-live the Battle of Trafalgar on the smallest ship in Nelson’s fleet, the replica warship topsail schooner, HMS Pickle!

Visitors can also test their sea legs on board the Bark Endeavour Whitby, an authentic replica of Cook’s HM Bark Endeavour, sailing from Whitby along the coast to nearby Sandsend.

Endeavour Wharf will become home to a live cooking theatre where local chefs will bring history to life, giving an 18th century twist to modern cuisine using food and produce that would have been eaten on board.

Throughout the weekend visitors will be able to enjoy live music, street theatre and sea shanties alongside local ales and a grand finale firework spectacular, as well as a play to be held at Whitby Abbey.

As if that wasn’t enough, you can visit the house where the young Cook served his apprenticeship in Whitby.

It is now home to the Captain Cook Memorial Museum which tells the story of Cook’s life from a young man to a great explorer, through evocative and personal collections, reconstructions and displays.

Launching on 10 February 2018, is the museum’s special 250th anniversary exhibition!

Escape to whole new worlds with The Strangeworlds Travel Agency, a magical adventure series perfect for...

Activity Quest is the podcast where we get out-and-about and do loads of exciting things. This week,...

On Monday, 19th April 2021, How to Train Your Dragon author and Children's Laureate Cressida Cowell MBE...