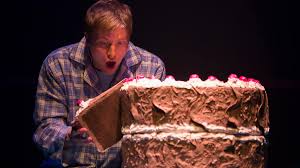 Follow the adventures of two brothers and the night-time disappearance of a chocolate cake in this new musical adaptation!

It’s based on a poem by Michael Rosen called Chocolate Cake, which has just been published as a picture book.

The show is from the same people as We’re Going on a Bear Hunt and How to Hide a Lion and is at the Polka Theatre until the middle of May!