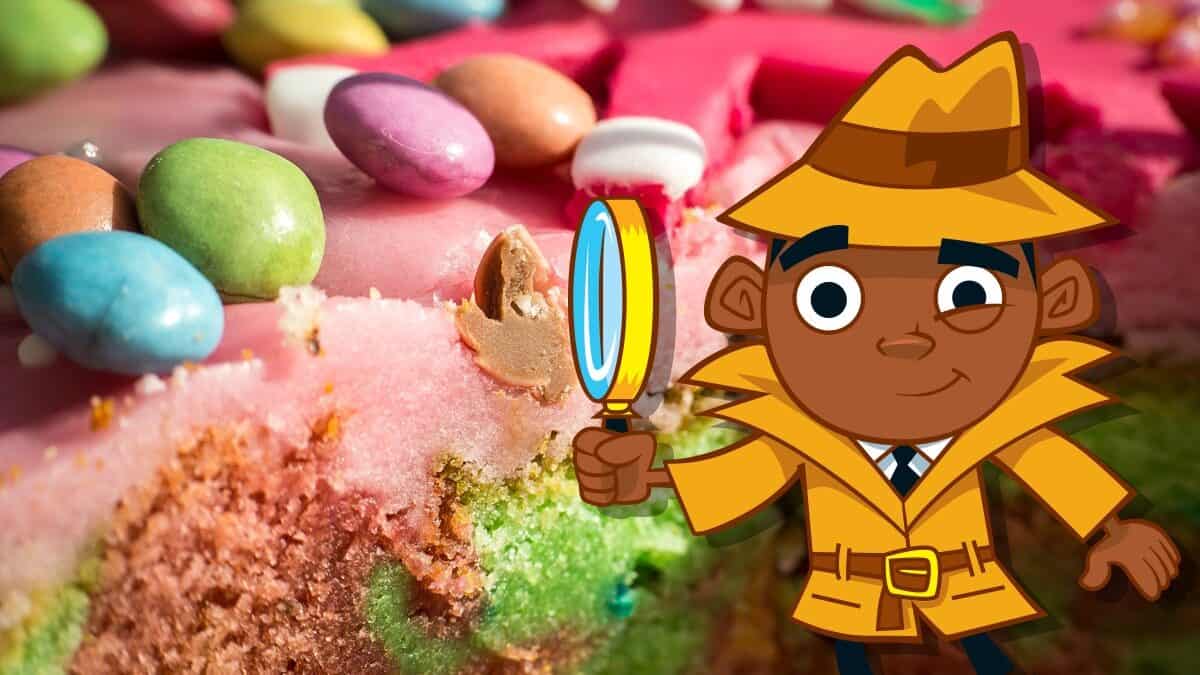 This is a story all about Detective Mathema’s Aunt Maud. Detective Mathema knew that her favourite colour was purple, that she rode a scooter and loved the stars. And that when she was younger she used to have green hair and played guitar in a local jazz band.

In fact, Detective Mathema knew most things about his Aunt Maud – apart from her age. Every year he would ask “How old are you?” and every year she would reply “One year older than last year and two years older than the year before that.”

But one day, Detective Mathema had a chance to work it out! His mother had thrown a surprise birthday party for Aunt Maud while he was away solving a case. His mother had made a cake with a star for each year of Aunt’s Maud’s age.

When Detective Mathema returned, he saw one slice of cake remained – with four stars on it. He asked his mother how many slices of cake there were to begin with.

“Well, we cut the cake so that everyone could have the same-sized slice with 4 stars on each but I can’t remember how many people were here, hmmm let me think… five guests hid behind the sofa. Another four hid behind the curtains. When Aunt Maud arrived, she came with five friends. And everyone had a piece except for me. I left my piece for you.”
“Aha!” cried Detective Mathema “Aunt Maud is 64!”

“How did you work that out so quickly?” asked his mother.

“It’s simple. I just needed to work out how many pieces the cake was cut into. You said that 5 guests hid behind the sofa and 4 others hid behind the curtains. When Aunt Maud arrived she brought 5 friends with her. That’s 15 guests. Now, not forgetting you mother, the total number of people at the party was 16, and so the cake was cut into 16 equal slices. With 4 stars on each slice, there were 64 stars in total. A star for each year! So our Aunt Maud is 64.

“How could there be?” asked Mathema, momentarily so perplexed that a bit of cake fell out of his mouth.

“Well you know MY age, and Aunt Maud as you know is my twin sister”

Mathemus was surprised to have been outsmarted – but then, who is smarter than a mother – especially one of such a clever mathematician.

“Well you had to get it from somewhere” she said. “Now don’t eat with your mouthful – even mathematicians need to mind their manners!”

Playing: time of your life by baze and his silly friends