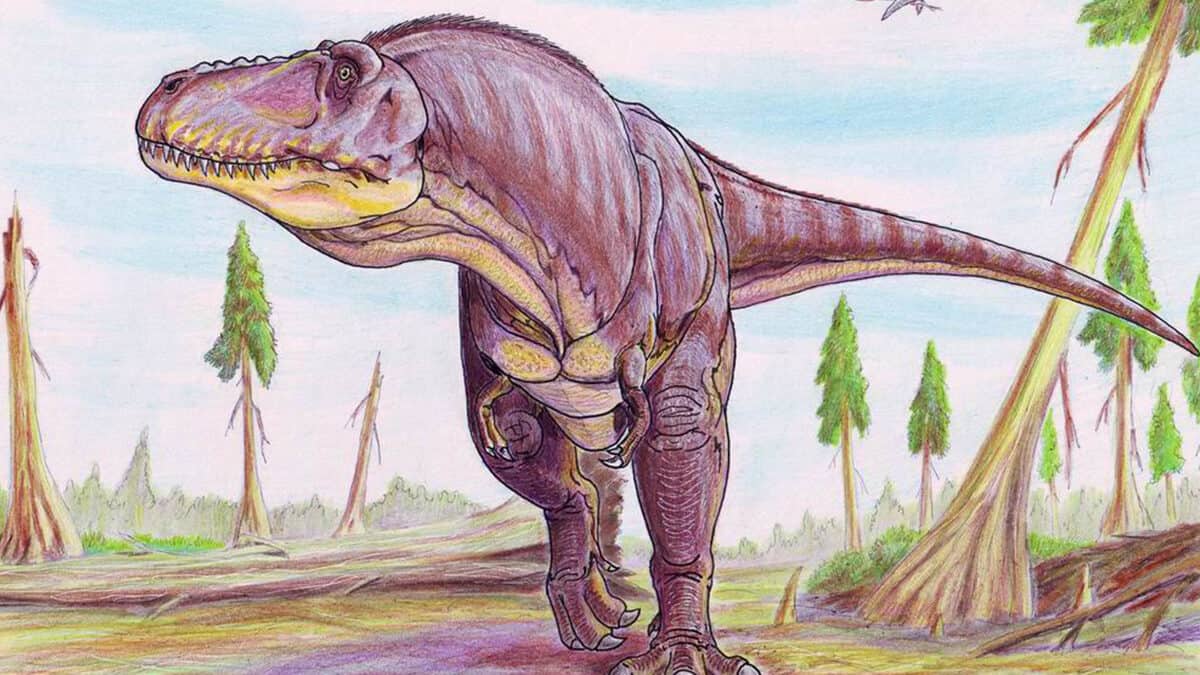 Welcome to the end of the Cretaceous Period, around 65 million years ago!  Around this time, there were more dinosaurs than ever before.  The world was crowded with groups ofTriceratops, duck-billed Edmontosaurus, squawking birds and a wide variety of plant and sea-life.  The end of the Cretaceous period is also where you’d find one of the best known dinosaurs of them all – Tyrannosaurus Rex!

You would DEFINITELY want to run from a T-rex.  His name means “King of the tyrant reptiles” and he was a terrifying meat-eating dinosaur found in the continent that is now North America.  This carnivore was massive at over 12 metres long and six to seven tonnes in weight.  He gouged at prey with his enormous jaws, and his curved teeth made it hard to escape.

Despite standing as tall as an elephant, T-rex’s brain wasn’t much bigger than a loaf of bread!  However, a cast from a fossilised T-rex skull shows the parts in charge of his sense of smell were bigger than in other reptiles.

That’s the smell of rotting meat.  A T-rex could sniff out a carcass from over a kilometre away – it might not have been as tasty as fresh meat but was an easy meal.

Tarbosaurus came from Asia, not North America, but had a lot in common with T-rex.  They looked similar and were both top predators.

Scientists think they are closely related even though they lived on other sides of the world.  Some have even suggested that they might be the same species.  But there were differences.  Lab tests show that Tarbosaurus had a less flexible jaw so he might have preferred carcasses to hunting wriggling prey.  And whilst T-rex had eyes that faced forward, Tarbosaurus had more sideways facing eyes.

The Age of the Dinosaurs came to an end 65 million years ago – it is thought that a giant asteroid, six miles across smashed into the earth where the town of Chicxulub in Mexico now sits, triggering tsunamis and dust clouds that blotted out the sun.

Plants could not grow, animals were cold and hungry and began to die.  From the seas to the skies, many creatures and plants disappeared forever – in fact, seven out of every ten species perished.

The Age of the Dinosaurs had gone and with it, two hundred million years of the most amazing creatures the world has ever seen.  Thanks to Palaeontologists, we know much about what it was like but there are many mysteries that remain.  Maybe one day you will make a new discovery yourself!