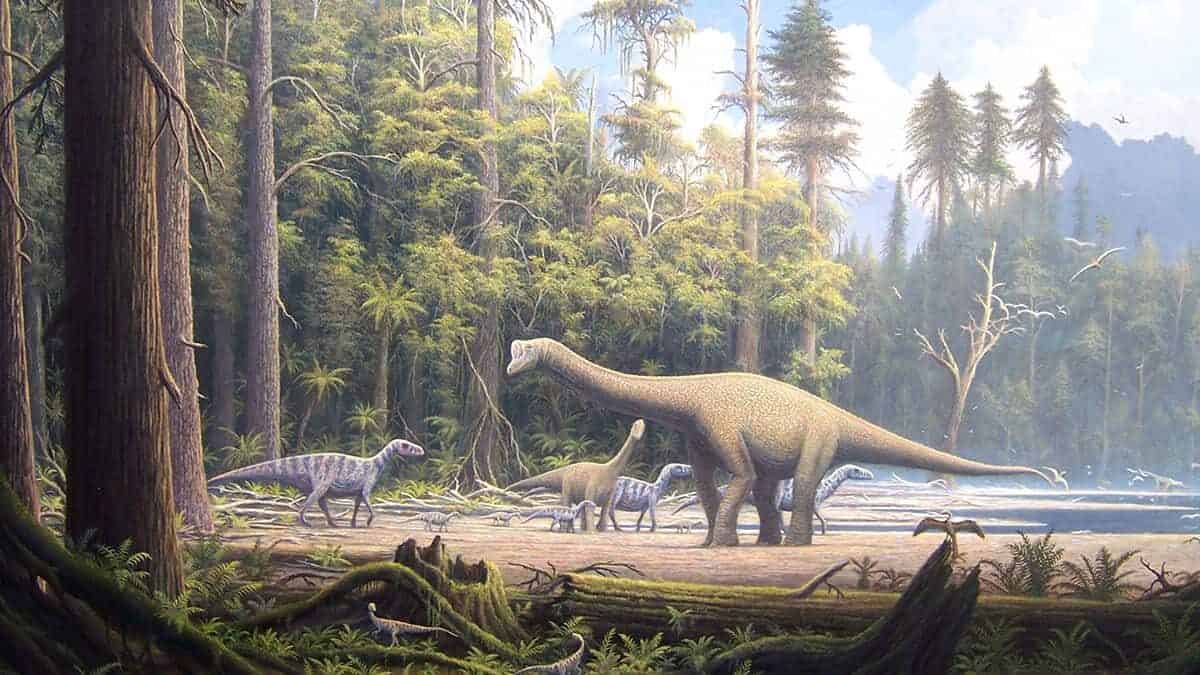 Welcome to the Jurassic period, which existed between 144 and 180 million years ago!  At the start of the Jurassic period, there was just one huge continent, called Pangaea.  And with no frozen ice caps, sea levels were much higher than they are today, and much of Earth’s surface was therefore under water.

During the Jurassic period, Pangaea began to separate.  The northern half – called Laurasia, broke away to start forming North America and Eurasia (what we otherwise call Europe and Asia), whilst the southern half – Gondwana, split in two ways.  Its eastern part formed Antarctica, Madagascar, India and Australia, with the western half forming Africa and South America.

Lagoons and massive lakes initially formed in the spaces created by the moving land masses.  Eventually, these became the oceans that we know today.

The Jurassic period was much hotter than we experience today, with hot and dry deserts in the middle of the land masses, huge sticky swamps along the coast and vast forests full of giant ferns and tall leafy green conifers in between.  And all sorts of dinosaurs were flourishing – like the knobbly armour covered Scelidosaurus.

Scelidosaurus was a dinosaur which lived in early Jurassic times.  Like his close relations, the Stegosaurus and Anklyosauyrus, he was a herbivore –meaning he only ate vegetation, not other animals.  But at four metres long – that’s as big as an elephant, they would have been pretty scary!

Fossilised skeletons of Scelidosaurus found in England have been some of the most complete skeletons ever found – meaning we know more about Scelidosaurus than many other dinosaurs.

Today, there are seven continents on the Earth – Europe is one, the others are Asia, Africa, North America, South America, Antarctica and Australia.  But how do we know that there used to be just one continent?

Palaeontologists can tell this from fossils and animal life.  By investigating land animals on different continents but which come from the same family, scientists can conclude that the only way that they could travel such great distances is that they originally came from the same place.  One example is the now extinct freshwater reptile – Mesosaurus.  It was a bit like a lizard and has only been found in Brazil and West Africa – two places that are now thousands of miles apart.