More From Chemistry and Art 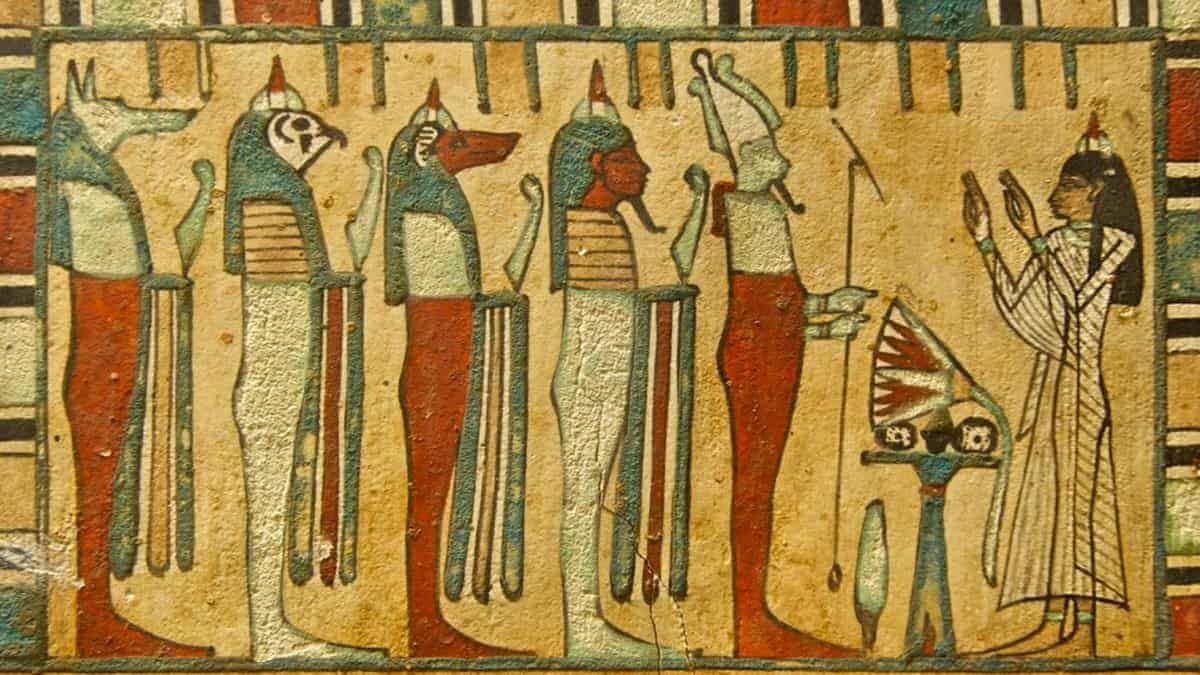 Ancient Egyptian pottery that has survived up to today shows us that the Egyptians were using chemistry – even if they didn’t realise it!

Heating clay changes it from something soft to something hard – that’s a chemical change!

The Egpytian pottery had a green colour, made from grinding up a mineral called malachite and mixing this with something gloopy (like a runn egg) to make it nice and sticky – that’s another chemical change.

From about 3000 BC, Ancient Egypt began trading with other countries from around the world.

This allowed them to get hold of an ever wider range of minerals which meant even more colours could be used! In fact, by now, men and women could get hold of pretty much any colour they wanted!

For centuries, blue paint was very difficult to get hold of.

To make blue, you could buy azurite or a rock called lapiz lazuli from Afghanistan. However, lapiz lazuli is mega rare and so it’s very expensive! Instead, the Egyptians found a way of making a blue paint of their own – all thanks to chemistry.

It was called Egyptian Blue and for centuries was traded all over the world.

To make it, the Egyptians would mix sand, limestone, bits of copper and a mineral called natron – all of which they would have been able to find in the ground or on the beds of many of the dried up salty lakes in Egypt. This mixture would be rolled into balls and heated in a type of oven called a furnace.

Heat is what makes the chemistry work – it provides the energy that helps things react together to form something new!

When the mixture has cooled down, it becomes a glassy blue substance which can be ground down to make a blue coloured pigment – that’s what gives the paint its blue colour!

If you go to a museum with Ancient Egyptian artefacts, you might see some funky drawings called hieroglyphs.

Although it might look like a load of cool pictures and symbols, these aren’t drawings at all but how the Egyptians wrote back then! Imagine reading a book nowadays with hieroglyphs instead of words!

The inks used for these hieroglyphs was made from soot mixed with vegetable gum and beeswax. These would and the material they were written on was a kind of paper made from plants, called papyrus.

Makeup and cosmetics were really popular in Ancient Egyptian times – for both men and women!

The most popular style was to have big, exaggerated black eyes. Back then they couldn’t pop to the shops to get some eye liner, instead they had to make a substance themselves called kohl – a mixture of grey coloured lead sulfide and soot!

They thought it protected them from evil and, in a way it did, because lead sulfide is an antiseptic. It kills bacteria so would have cleared up any eye infections they had!

The reason why mummies have survived in fact for thousands of years is because they were really well-preserved by the Ancient Egyptians.

Mummies were painted with a pigment mixed with beeswax which was then heated to make it fix.  The process is called encaustic decoration and it really worked!

Most paints and pigments survive best when they’re kept warm and dry, and as Egypt is a pretty warm and dry country that has helped them last.

Mummies have been so well-preserved that they’ve must have given the archaeologists that discovered them quite a fright!

Next up, we’re going to explore Anicent Greece…