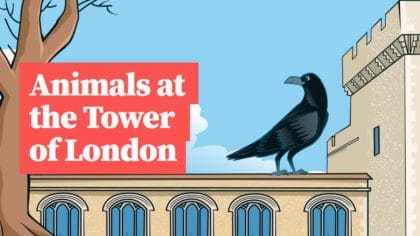 One of the most famous legends of the Tower surrounds the ravens. The story goes that should the ravens leave the Tower, both it and the kingdom will fall!

Seven ravens live at the Tower today and are cared for by a dedicated Yeoman Warder known as the Ravenmaster.

The current Ravens are called Jubilee, Harris, Gripp, Rocky, Erin, Poppy and Merlina. And excitingly, raven chicks have been hatched at the Tower for the first time in 30 years!

Charles II is thought to have been the first to insist that the ravens of the Tower be protected after he was warned that the crown and the Tower itself would fall if they left.

The King’s order was given against the wishes of his astronomer, John Flamsteed, who complained the ravens impeded his observatory in the White Tower!

The ravens are free to roam the Tower precincts during the day, and when you visit the Tower, you might be lucky enough to witness the ravens snacking — but please be careful and do not feed the ravens yourself, as they can bite!

The Ravenmaster occasionally trims some of the ravens’ primary and secondary flight feathers to encourage them to stay at the Tower.

All the Tower ravens are able to fly but, with careful feather management, plenty of food and a comfortable new enclosure, they are happy to call the Tower their home.

However, some ravens have gone absent without leave in the past and others have even been sacked!

Raven Munin flew off to Greenwich and was eventually returned by a vigilant member of the public after seven days. Raven George was dismissed for eating television aerials and Raven Grog was last seen outside an East End pub.

The ravens are fed twice a day on a special diet of mice, chicks, rats and assorted raw meats. And sometimes as a special treat, they are given biscuits soaked in blood! Yum!

It seems incredible to imagine but the Tower was once home to a collection of weird and wonderful beasts – and as such was the very first zoo in London.

The Tower menagerie began as a result of medieval monarchs exchanging rare and strange animals as gifts.

In 1235, Henry III (1216-72) was presented with three leopards (probably lions but referred to as leopards in the heraldry on the King’s shield) by the Holy Roman Emperor Frederick II. These inspired the King to start a zoo at the Tower. Over time the collection of animals grew: the lions were joined by a polar bear in 1252 and an African elephant in 1255.

In 1252, Henry III was given a magnificent white bear, presumably a polar bear, by the King of Norway.  Although it was kept muzzled and chained, the bear was allowed to swim and hunt for fish in the Thames. A collar and a ‘stout cord’ were attached to the bear to keep it from escaping.

The King of France sent an elephant to the Tower in 1255, and Londoners flocked ‘to see the novel sight’. Although the elephant had a brand new 40 foot by 20 foot house and a dedicated keeper, it died after a couple of years.

Edward I (1239-1307) created a permanent new home for his menagerie at the western entrance to the Tower, in what became known as the Lion Tower. The terrifying sounds and smells of the animals must have both impressed and intimidated visitors.

By 1622, the collection had been extended to include three eagles, two pumas, a tiger and a jackal, as well as more lions and leopards, which were the main attractions.

James I (1603-25) had the lions’ den refurbished, so that visitors could see the lions prowling around their circular yard.

In 1826 the Constable of the Tower, the Duke of Wellington, dispatched 150 animals to a new home in Regent’s Park – creating London Zoo.  The Menagerie closed for good in 1835, with many remaining animals sold to other zoos or travelling circuses. The Lion Tower was later demolished.

Today, you can see 13 galvanised wire sculptures – a family of lions, a polar bear, an elephant and a baboon troupe that commemorate some of the inhabitants of the Menagerie.  These sculptures, created by artist Kendra Haste in 2010, are displayed near to the places the original animals were kept!