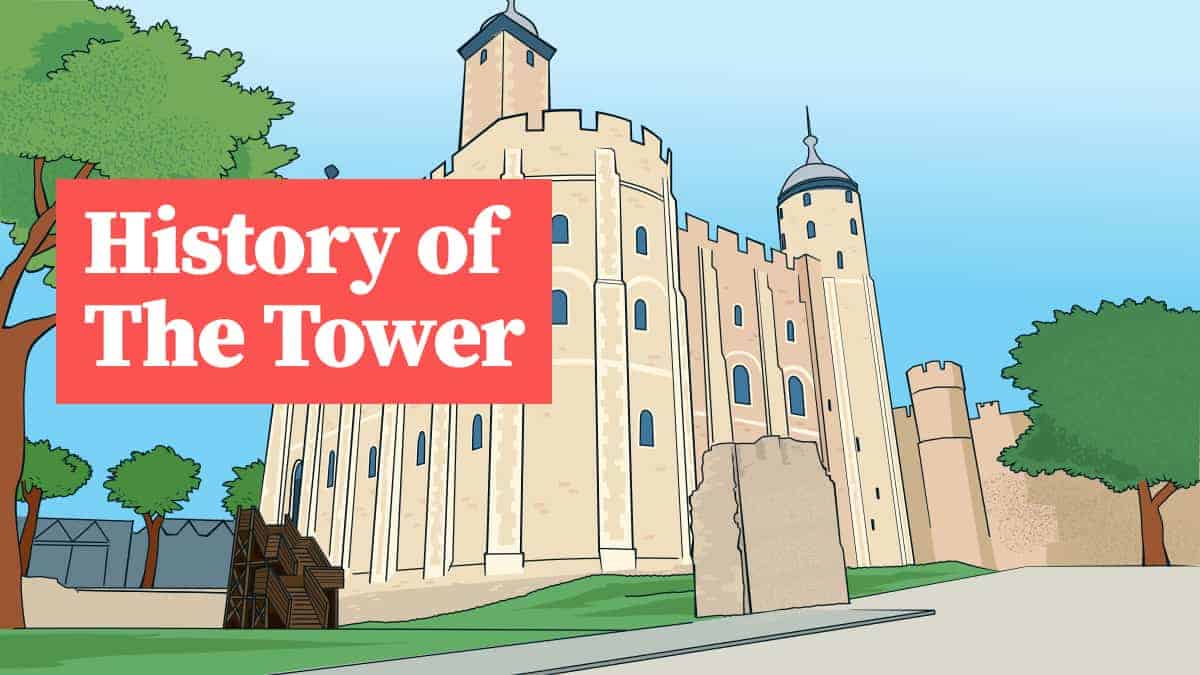 Hi! Welcome to the Tower of London. My uncle’s a Yeoman Warder – or a Beefeater as they’re often called. You can’t miss them in their colourful uniforms. Do you want to find out more about this amazing place?

Now the Tower of London is quite old. In fact, parts of the tower are very old indeed – much older than my Gran’s Gran… and her Gran before her!

The Tower’s been around since Roman times and has seen many changes over the years. Here’s some handy history facts!

The Tower dates back to AD 200 – that’s Roman times, when the original structure was built at the corner of a wall around Londinium. The line of this wall is still visible within the Tower site on the east of the White Tower and parts of the wall are visible by the Ravens shop.

After the successful Norman invasion in 1066, William the Conqueror (1066-1087) set about building his capital and the Tower was one of three fortifications which controlled and protected the eastern entry to the City from the river, as well as serving as his palace.

Work on the White Tower began in around 1078 and they say took 25 years to complete. It was one of the first great stone towers to be built in Britain and the tallest tower in the country.

By the end of the 14th century, Richard III (1377-1399) had completed building a wharf separating the outer wall from the river. Apart from some later minor changes, his fortress is the one we see today.

During Henry VIII’s long reign (1509-1547), how the Tower was used changed as the Tudor dynasty grew. Royal palaces were no longer used as defensive strongholds and became residences to show off the monarch’s wealth and power. Henry spent lots of money on improvements to the Tower for the splendour of Anne Boleyn’s coronation.

Because of its strong defences, the Tower was the perfect home for the London Mint and a great place to keep important prisoners. During the Tudor period, famous prisoners included Anne Boleyn, Lady Jane Grey and Walter Raleigh, as well as a young Princess Elizabeth (who later became Elizabeth I).

The 17th century was a topsy turvy time for Britain with a civil war and many political changes. During the reign of King James 1 (1603-1621), the failed gunpowder plotter, Guy Fawkes, was imprisoned, interrogated (in the Queen’s House) and tortured at the Tower.

After the Civil War (1642–1651), Oliver Cromwell, as Lord Protector, ordered the original crown jewels to be melted down during the 1650s, possibly within the Mint itself! After the restoration of the monarchy, Charles II (1660-1685) had the Crown jewels remade.

During the Stuart period, the Tower was used as a prison and storehouse for munitions, as well as for the Royal Mint.

During the Victorian period leisure time for workers increased and so the Tower began to see more visitors. The White Tower also became home to some important government departments during Victoria’s reign, including the Public Records Office and the Board of Ordnance (which controlled supplies to the army and navy).

During the Second World War, parts of the Tower were destroyed by bombing, including part of a building used by the Royal Mint and the Main Guard.

War Prisoners, including the German deputy leader, Rudolph Hess, were kept as prisoners in the Tower.

Playing: like to be you by shawn mendes feat. julia michaels