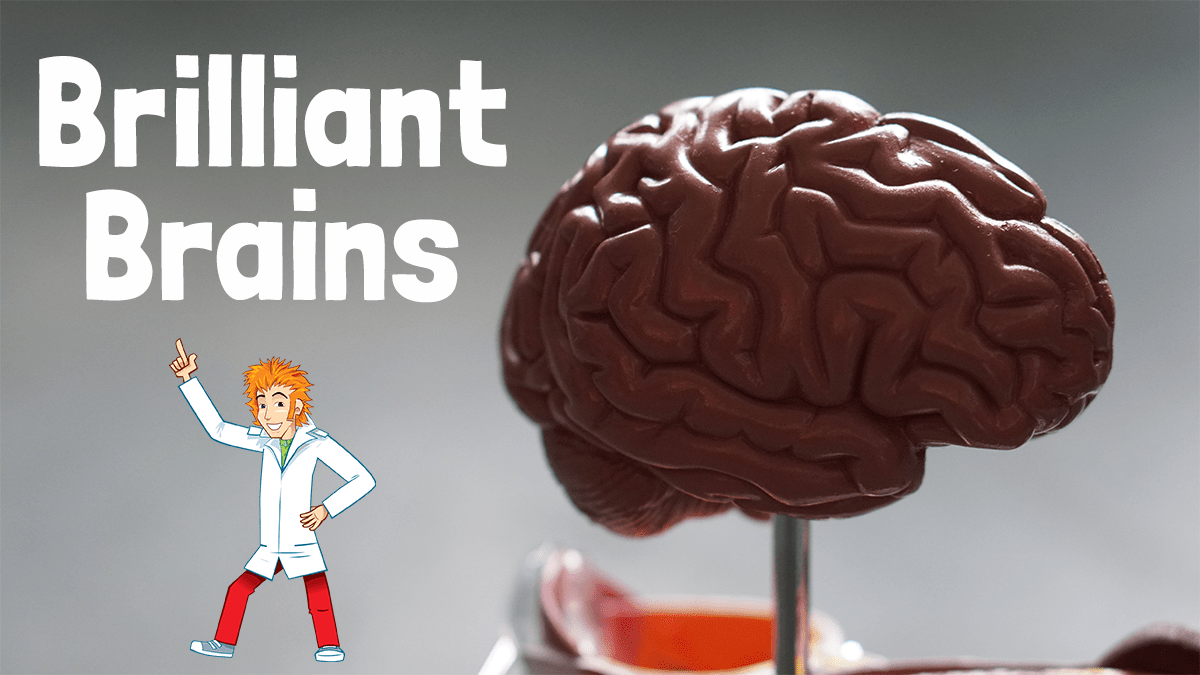 Hello again my little lab rats and welcome to my blog post about building my very own human body.

Today Nurse Nanobot and I inserted the brain – our own personal computer that helps make sense of everything that goes on in and around the body.

Press the play button above to listen to us explore inside your brain, and also read loads of interesting facts below!

There are five main parts to the brain – the cerebrum, the cerebellum, the brain stem, the pituitary gland and the hypothalamus.

The cerebrum is the biggest part. It makes up over three quarters of the brain’s size and controls the thinking and doing – like when you’re doing your homework, playing a game on the computer or simply want to shake your hand about.

The other important job that the cerebrum does is memory – not just things about today, like what you had for breakfast, or remembering your PE kit but how to get to your gran’s house and what you gave you mum for Christmas last year.

Part of the cerebrum called the hippocampus which is responsible for processing memories.  Every minute of the day as things happen, when you do something for the first time or meet someone, your hippocampus decides if it – or they – is worth remembering.

If so the connection of neurons firing is recorded in the cerebrum, like a photograph stored in a book.  Remembering is like getting the photo out to have a look.

Memory is good but it can go wrong – we can easily forget things, even things that are VERY important, like the answers to an exam question. However, most of the time it’s nothing to worry about.

I was very careful not to bash the body’s brain about though as that’s a way we can lose memories.  A bash to the head can cause the brain to shake about in the skull causing concussion, which can make you very muggy and forgetful, but don’t worry as it usually passes quickly.

More serious head injuries can lead to permanent damage though so when on your bike always make sure you wear your cycle helmet, oh and don’t walk into lamp posts!

It’s thought the right side has more to do with the creative aspects of life, and that the left side is better at logical number crunching stuff.

But it’s awfully hard to prove either way as the brain is very good at adapting, so if for example someone has brain damage on the left side, the right side can sometimes take over.

The cerebellum is round the back and is a much smaller part of the brain.

It makes sure all your muscles move in the right order, controls balance and coordination – which means it helps you stopping you falling over, basically!

The brain stem makes sense of all those signals coming to the brain from around the body.

It also keeps your blood pumping, your lungs breathing and your food digesting – all the things you need but never think about!

If you need more air, more energy or more blood, it will send messages about the body to make sure you have everything you need.

The pituitary gland is the same size and shape as a baked bean, so it’s very small indeed.  It may be titchy but it’s got a tall tall job.

The pituitary gland sticks out on a stalk from the bottom of the brain between the optic nerves.

Its job is to release hormones – clever chemicals which travel in the bloodstream carrying instructions around the body, controlling your growth and metabolism.  This includes growing up into an adult, both in size and with the changes you will go through in puberty and throughout your life.

Another control box, near to the pituitary gland is the hypothalamous.  It’s job is to keep your body at the right temperature, precisely 37 degrees Celsius.

If you get too hot, your blood vessels will be told to expand to expose more blood to the surface and then it’s on with the sprinklers – your sweat glands!

If you’re too cold your blood vessels will constrict to stop your blood cooling – and that’s why you might look pale.

Your brain and the nervous system are made up of neurons – clever microscopic cells that have branches that allow them to connect to other neurons, with synapses as the connecting glue.

You have as many neurons today as you did the day you were born.  But when you are young, they are not all connected.

Dreams seem mysterious.  In the past it was believed demons, spirits and even witches caused bad dreams or nightmares. However, we now know they are just the neurons firing on their own when we are at rest.

Why do they fire by themselves?  The brain seems to like remembering things that have happened and building on them, most likely to make sense of the world around it and our place in it, a bit like making a collage from all those ‘photos’ in the hippocampus’s file.

It can be interesting to make a note of your dreams in the morning – if there is something scary or puzzling in them it can reflect something you’re struggling with in real life.

You may have seen comics or films where pretend monsters called zombies want to eat brains – but now and again across history there have been reports of people really eating the brains of the dead!  Often it is as a ritual believed to result in absorbing the spirit of the dead person.

As well as being a pretty yucky thing to do, eating someone else’s brain can be dangerous.

Less than a hundred years ago the Fore tribe of Papua New Guinea was devastated by a disease called kuru, which was passed on by mortuary feasts in which the brains of the dead were consumed.

Well after Nurse and I inserted the brain, things didn’t seem to go to plan!

Our body started to giggle loudly and began to run around the lab very fast.  The Body then found the back door and escaped.

Ho hum – time to dust off my diodes and get start again.  Join me and Nurse Nanobot again, when we’ll being starting off again to make a skeleton.

See you next time for more medical mayhem!