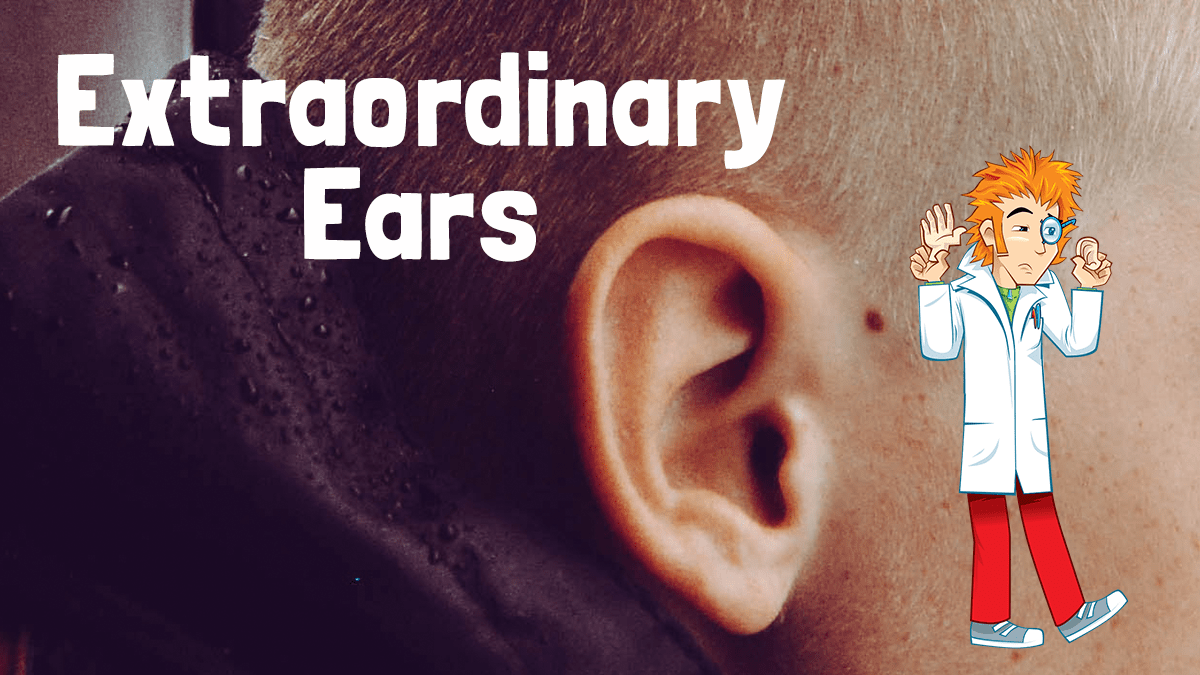 Hello medical movers and welcome to my blog post about building my very own human body!

Today Nurse Nanobot and I attached some lovely big ears to our body’s head.

Press the play button above to listen to us explore the world of ears and also read loads of interesting facts below!

Ears are in charge of collecting sounds, processing them and sending sound signals to your brain.  But did you know that ears also help you keep your balance?

The ear is made up of three different sections which work together so you can hear and process sounds.

The outer gristly part of the ear you can see is called the auricle.  Its job is to collect sounds like a funnel and point them into a hole.  This hole is called the ear canal and that’s where you find icky and sticky earwax.  Earwax plays an important role – it stops stuff sliding into your middle ear and has special chemicals to keep out infections.

Sound waves travel down the ear canal and vibrate the ear drum – a thin piece of skin stretched tight like a drum which separates the outer ear from the middle ear.

Another term for the ear drum is the tympanic membrane – which comes from the same word as tympani, the big kettle drums used in orchestras.

Vibrations from the ear drum are transmitted through three amazing tiny bones called ossicles that help deliver sound waves into the inner ear.

Those clever ossicles have some funny names – the first ossicle is called the malleus, which is attached to the eardrum and means “hammer” in Latin.

Next is the incus, which is attached to the malleus and means “anvil”.

And the third is the stapes. This is the smallest bone in the body – it’s the same width as the edge of a one pound coin, and is attached to the incus and means “stirrup”.  It even looks like a tiny stirrup.

Once the sound has gone through the ear drum and ossicles the vibrations move through a curled tube called the cochlea.

The cochlea is full of liquid so the movement is like a wave.  Tiny hairs along the walls of the tube move as the wave passes – and every hair sends nerve signals to the brain – creating the sensation of sound!

The inner ear also contains the part that helps control balance as well.

Above the cochlea are three small loops called semicircular canals.  Like the cochlea, they are also filled with liquid and have thousands of hairs which move when the liquid moves.

It is these little loops that helps us keep our balance – the hairs can sense whether the liquid is tipping this way or that or moving around and around.  Messages are sent to the brain, which then reacts to keep us steady

Sometimes we feel dizzy – if we’ve been spinning around or moving very quickly in different directions, that swooshing liquid carries on moving after we’ve stopped, and that can make our brains very confused.  That might have happened to you after you’ve got off fairground waltzer!  After a while, the liquid settles down again, you feel better again and then head off for another ride!

Take Care of Your Ears

Your hearing is very important, and your ears can get damaged by loud music and noises, as well as infections.

Loud noises like music or machinery can hurt the tiny hairs in the cochlea when the vibrations are too strong and once you’ve damaged your hearing, it’s gone for good, or at least can give you tinnitus – a really annoying ringing sound in your ears all the time.

That’s why people who work in noisy environments wear ear protectors or ear plugs.  You should too when you are around nosy machines, and never play music too loud through your headphones.

Another way to keep your hearing healthy is to not poke things in your ears.  You might think you’re cleaning them out but you’re more likely to just shove the earwax all to one end and add a whole load of germs in too.

If your ears feel blocked up, chances are that you might have an ear infection making the walls of the ear puffy, or a build-up of compacted wax – and no amount of digging about is going to help – get yourself to a doctor.

The Egyptians believed that a ringing ear was “bewitched” and would tip a brew of oil, frankincense, tree sap, herbs and soil into the ear with a reed stalk to help remedy the problem.  It’s unlikely that this cured any problems – the soil certainly would not have helped, although olive oil is still used to break up ear wax in ears that are blocked up!

A Middle Ages treatment was to take a loaf of hot bread, dividing it in two, and put it in each ear as hot as you could take it and thus perspire, and by the help of God you would be cured!  Sounds like a waste of toast to me!

Did you know that people used to use icky sticky earwax as a lip balm?  Whilst monks used it to colour in ancient texts?

Playing: like to be you by shawn mendes feat. julia michaels