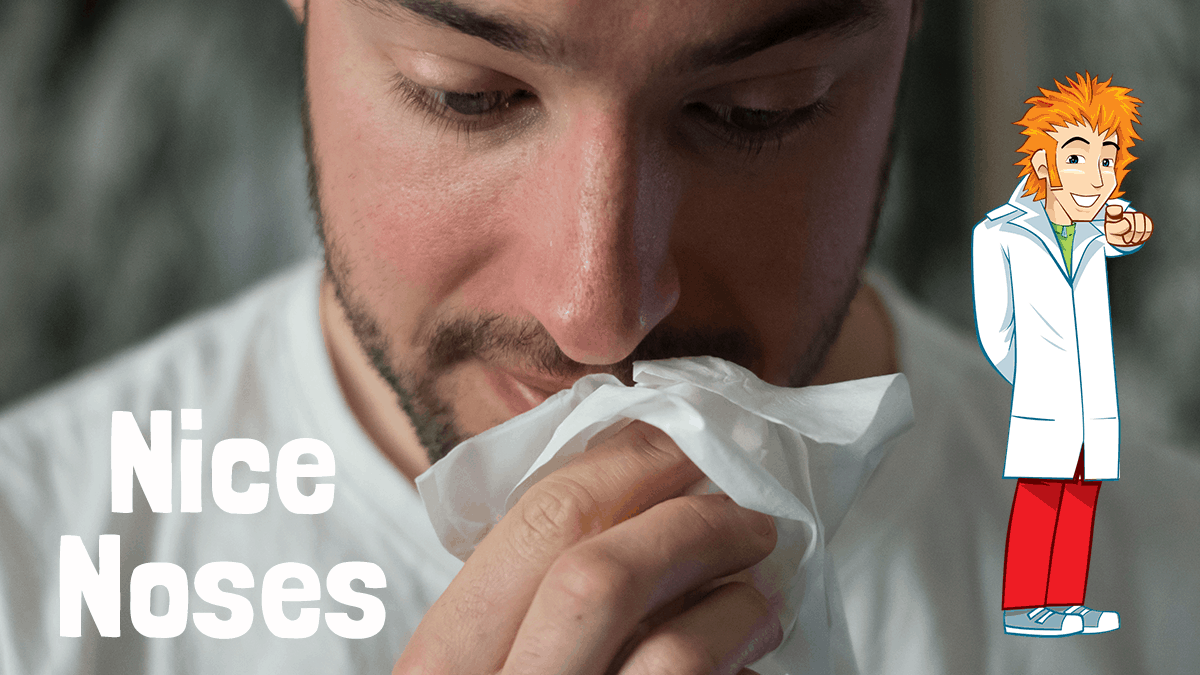 Hello again medical boffs and welcome to my blog post about building my very own human body.

Today Nurse Nanobot and I added a nice nose to my body – noses aren’t just there to balance your sunglasses on, they are sniffing specialists, brilliant for breathing and help us taste things too.


Press the play button above to listen to us explore the world of your nose and also read loads of interesting facts below!

Your nose has two holes called your nostrils – these holes go all the way into your head and down into your lungs.

The nostrils are separated by a bendy wall called the septum which is made of cartilage – the same material that forms the top part of your ears.  If you pinch and wiggle your nose you can feel the bendy cartilage moving.

There’s a space behind your nose called the nasal cavity and air pockets called sinuses which are lodged in the bony bits around the edge.  The nasal cavity is separated from your mouth by your palate – that’s the roof of your mouth.

The internal parts of the nose are coated with fine hairs and mucus – a gloopy substance that has many amazing properties.

The hairs and mucus act like a sticky doormat to catch dirt, dust and even germs.  The mucus is also what you might call snot!  And because that snot catches all the germs, don’t pick your nose and eat it!

Our noses help us breathe.  As air comes in the nostrils it’s warmed up and cleaned as it passes over the mucus membranes and hairs.

Noses have a lot in common with taste buds and your eyes – they scoop up information about what is around you and send it to the brain for decoding.  The nose’s specialist subject is smells of course.

The scientific word for your sense of smell is olfaction and tissue coating the space behind your nostrils is the olfactory epithelium.

It is covered with over 10 million receptors that pick up odour molecules and transmit their information to the olfactory bulb in your brain. Your brain can discern about ten thousand smells – both yucky and yummy, like stinky cheese or a delicious freshly baked tray of biscuits.

Smells aren’t just for telling what’s for tea – being able to tell what something is, often when you can’t see, helps keep them safe.

If something was burning your nose would know before your eyes could see the smoke and if you were about to eat a burger that was bad you’d be very likely smell the ick before taking a mouthful and getting a horrible taste in your mush – or if you were paying attention you would!

Did you know you’d struggle to taste things at all without your nose?  Those olfactory receptors work with the taste buds to piece together what something is like – just like parts of a puzzle.

Lots of things can irritate the nose – for example when a cold has made your mucus membranes sore, or if you are particularly sensitive – or allergic – to certain substances like pollen or cat hair.

Sneezing is the nose’s way of getting rid of the irritation in your nose.  The tickle triggers a response in part of the brain called the sneeze centre – and a whole load of muscles from your stomach to your chest work together to kick the tickle out!

The nasal cavity is quite close to the brain and this is sometimes quite handy.

The Ancient Egyptians used to embalm their dead and this required them to remove soft and squishy tissue from the body – like the brain.

But how did they get the brain out without cutting the body open?

Simple – they’d shove a giant hook up each nostril pushing it through the nasal cavity and pull the brain out bit by bit through the nostrils.  The brain gunk would be put into pots of embalming fluid and the empty head washed out.

Colds and sneezes are bad enough but sometimes you can get a terrific build up of mucus in your sinuses – those air pockets in your head above the nasal cavity – and that can make you feel really grotty.

What happens is the cold virus can damage the little hairs that normally keep the mucus moving and so it clogs up like a traffic jam.

The mucus builds up and builds up until it is like a big stagnant puddle with lots of bacteria, viruses and even fungi swimming in it.  When this happens you get a sore face and a headache and your voice shtarts shounding very funny indeed