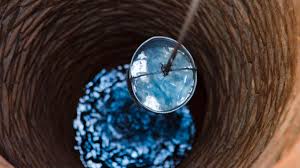 If you’re reading this on your computer or a brand new tablet, you’re probably lucky to have clean tap water too!

But where does tap water come from? Well, water that comes out of the tap has been on a very long journey…

At this stage, the water is unlikely to be fit to drink. It might have sludge and bits of dead animals in it. Gross!

Before it gets to our taps, the water goes through treatment plants where it’s sifted and sieved to remove all the debris and given a good shake to release any yucky gases.

It’ll also be filtered many times to remove any sludge. Near the end of the process, a chemical called chlorine – that’s the same stuff they use in swimming pools – is added to kill any bacteria.

In some areas, fluoride may also be added to help keep teeth healthy. You shouldn’t be able to taste either of these chemicals – in fact you probably never realised they were there before – and studies have shown they’re pretty harmless to human health!

After all that, all that’s left is for the water to travel through a network of pipes to your tap!

It’s not that easy in other parts of the world. Many people don’t have access to clean drinking water at all.

According to WaterAid, 844 million people live without clean water. That’s one in every 10 people on the planet.

Although everyone in your class has access to clean water, that’s the same as three people being without it.

Luckily, there are loads of charities helping out.

One charity, Charity:Water, has helped fund over 19,000 projects, bringing clean water to over 6.1 million people!

And WaterAid has reached 25 million people since it started in 1981!

Hallux’s Hydration Helpdesk is now open and is answering all of your water and hydration questions!

You can listen to Hallux’s Hydration Helpdesk on:

Hallux’s Hydration Helpdesk, with support from The Children’s Health Fund.

Have you ever wondered why our bodies actually need water? Professor Hallux is here every day on Fun Kids answering all your questions about water!

More From Professor Hallux: Hallux’s Hydration Helpdesk
Back to top