Find out all about your eyes with Professor Hallux's i-Guide! 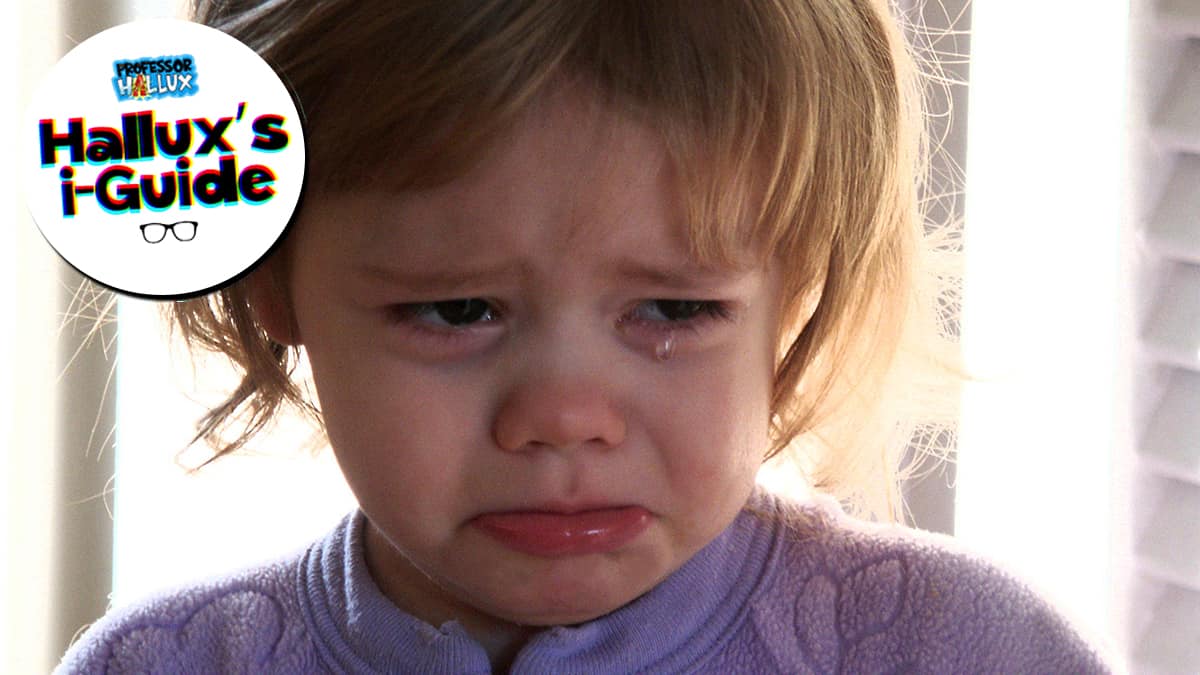 Emotional tears are caused by strong feelings of happiness, sadness or pain – are different from the tears produced, for example, from peeling an onion, and may contain hormones and chemicals released by the body.

Crying might make your eyes red and puffy, but they won’t affect your eyesight – you can’t literally ‘cry your eyes out’!

There are three types of tear, with each containing a combination of water, fats, sugars and proteins.

They all play an important role in protecting and preserving the condition of our eyes:

Basal is the liquid constantly present in the eye, which ensures that the cornea is always wet and nourished.

The cornea itself has no blood vessels, and is dependent upon the tear film for its oxygen supply, which it gets from the air when the eye is open. The thin layer of liquid also smoothes out irregularities and creates an even surface of good optical quality, which is re-formed every time you blink.

The washing action of the liquid tear film reduces the ability of bacteria to adhere to the surface of the eye, while the antibiotic proteins in the liquid help kill them off. Basal tears also act as a lubricant to limit the impact of friction on the eye caused by movement of the eyelid.

These tears are essentially the same as basal tears, but are a result of an increase in the level of liquid the eye produces in response to a sudden external stimulus.

This could be due to the irritation of the eye by foreign particles, such as dust, or from irritant substances like onion vapours, tear gas or pepper spray.

By creating a sudden increase in the level of basal tears, this reflex serves to immediately wash out irritants that may have come into contact with the eye, and makes your eyes ‘water’.

Crying due to pain, grief, anger or happiness, is often accompanied with spasms of the whole body and interrupted breathing patterns.

Tears brought about by emotion have been shown to contain a different chemical make-up than to those of basal or reflex tears in that they have more protein.

A high level of emotions can trigger the parasympathetic branch of the autonomic system (the part of the body that acts as an unconscious control system), and will cause the glands near your eyes to produce tears.

One researcher has suggested that by excreting these hormones in the form of tears, the body is helping you feel calmer and less emotional afterwards.

Next: What are cataracts?

Find out all about your eyes with Professor Hallux's i-Guide!

More From Hallux’s i-Guide
Back to top