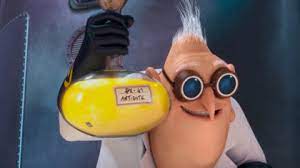 In movies, when someone has a poison they can be given an antidote to cancel out the effect.

So you might be wondering, are antidotes a real thing?

There are plenty of poisonous things on earth that require antidotes and unlike toxic alien reptiles from Mars – they’re real!

An antidote is a substance which can counteract a type of poison. We have such substances in our bodies already – the antibodies that our cells create to fight infections.

In the minutes after you’ve been bitten by a toxic snake, there might not be time for your body to create enough antibodies – and this is where man-made antidotes come in.

Scientists put small amounts of the poison in other animals and collect the antibodies they create – these can be combined to create an antidote that will get rid of the poison much more quickly than our bodies can on their own.

But remember, there are still poisons in the world which we don’t have antidotes for yet, so always stay away from toxic alien reptiles from Mars. Just to be on the safe side!

You can hear Hallux’s More Physiology Fix-Up weekdays from 6pm on Fun Kids!

Learn about the human body in this podcast - from brains and bones to ears and eyes!

Learn about the human body in this podcast - from brains and bones to ears and eyes!

Playing: i don't feel like dancin' by scissor sisters