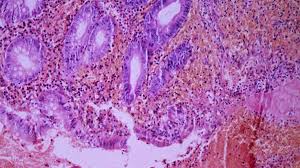 One of Professor Hallux’s favourite TV shows is one called ‘Time Cop Crime Stop‘. In the show, the Crime Cops solve all types of mysteries by looking at the evidence and asking questions. Nurse Nanobot isn’t that impressed by it though – she’s far more excited by ‘Robot Wars’ for some reason!

Now, there’s a type of medicine that is all about solving puzzles – it’s called pathology!

Pathology certainly isn’t always about dead people. In fact, it’s most commonly used to diagnose and treat people who are alive, but the word tends to make us think of detective shows.

A Forensic Pathologist is primarily involved in identifying the cause of death and the circumstances by which the death occurred.

A dead body is called a corpse, and an autopsy (sometimes called a post-mortem examination) is a medical examination of a corpse to find out what killed them.

Autopsies aren’t done all the time. They’re usually done either for medical reasons or for legal ones.

A medical reason may be when doctors aren’t sure why a person died, whilst a legal one might be to find out if the death was the result of a crime. Wherever there is a puzzle, that’s where you’ll find pathology!

Well, sometimes the cause of death can be found by simply looking at the corpse without opening it, like looking for bruising or examining finger nail tissue samples under a microscope to establish the cause of death.

But other times, pathologists may need to also examine the internal body organs. Don’t worry, if a body is opened, it’ll be closed again. Pathologists don’t like to make mess so it’s not normally quite as dramatic as detective shows.

More From Professor Hallux’s Pathology Puzzles!
​
​
Back to top
​ ​ ​