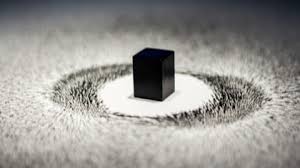 Whilst magnetism may not be a fundamental force, its not useless.  Magnetism is an integral part of Earth.

Magnetism is a force created by electricity, or more specifically by electrons. In any iron atom, there are 26 electrons. Each electron has a tiny bit of negative charge.

The way these electrons behave is impossible for us to imagine, because it’s not like anything we can see. But we can understand it by thinking about it like this:

At the same time, each electron spins around, like the teacups spin around when you turn the wheel. The electrons, like the teacups, have momentum that makes them spin either clockwise or counter-clockwise.

In most objects, some electrons spin one way and some spin the other way, and they cancel each other out, so most objects are not magnetic.

In a chunk of iron, also, some electrons spin one way, and some spin the other way, and most of them cancel each other out. But in iron, there are some extra electrons that can go either way.

When you run a magnet over a chunk of iron, those extra electrons all start spinning the way the magnet pulls them, and the chunk of iron becomes a magnet itself.

Many objects in space are magnetic. The Sun, for instance, is very magnetic, because there are places on the Sun where there are a lot of extra electrons or protons.

Until about two hundred years ago, people made magnets by rubbing iron on lodestones. The rubbing lined up the electrons of the iron so that all the electrons would pull in the same direction. But today we can use electricity to make magnets.

What we’re going to need is:

What we’re going to need:

Watch the science behind magnets…

More From Physics Week
Back to top