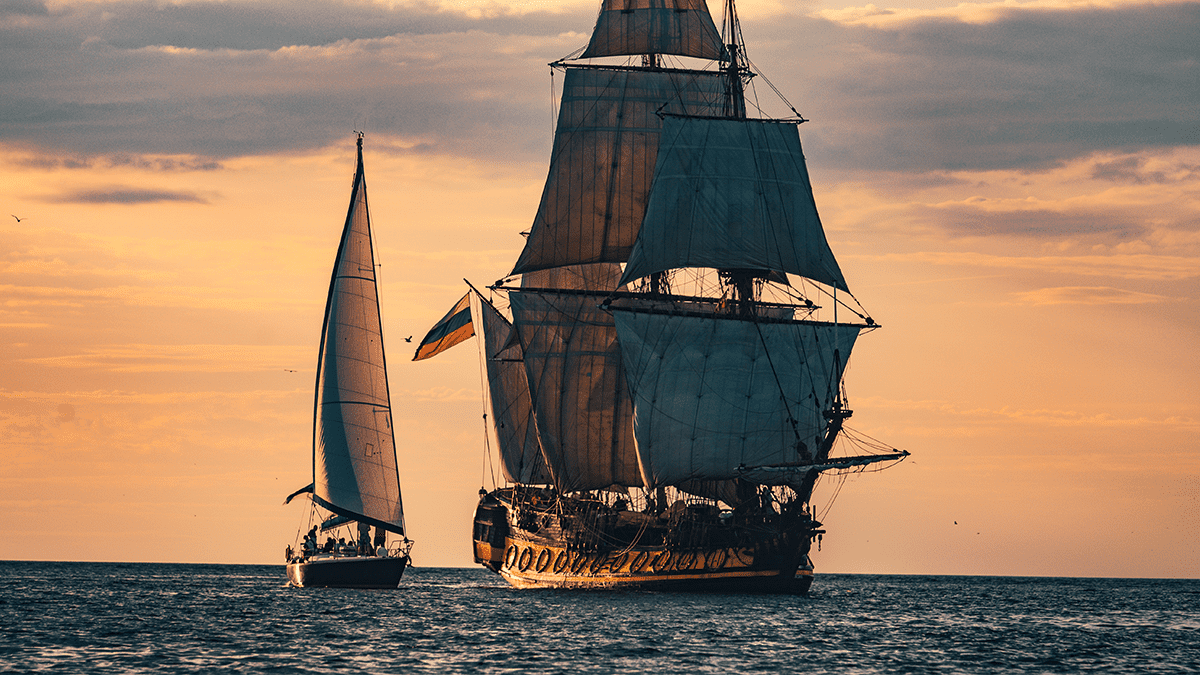 By the 15th century, boat designers were thinking more about how to travel further… and faster, and many new developments were seen.

One development was having more than one sail on a mast, with smaller sails above  the main sails.

Another, was having more than one mast, with a second mast and then a third.  And so, by the end of the 15th century, there were ships with four masts and as many as eight sails – these were known as ‘Carracks’ and were originally designed by the Portuguese for use in the Atlantic Ocean.

And with the ability to cover greater distance, the boats themselves became larger.  An example is the ‘Grace Dieu’ built in 1418 for Henry V. Her remains were found in the mud of the Hamble River in 1933, and she was 125 feet long and 50 feet wide.

The Mary Rose is another famous Carrack that you can see.  She was built for Henry VIII’s fleet and after 33 years in service, saw her last action on 19 July 1545. Unfortunately, while leading the attack on the galleys of a French invasion fleet, she sank in the Solent.  She was salvaged, though, in 1982 and can be seen today in Portsmouth.

Carracks had a high rounded stern with high “castles” in the bow and stern with a low waist of open decking in the middle.  At the back of the boat (or the ‘stern’) was the ‘Aftercastle’ (sometimes aftcastle), which is where you would find the captain’s cabin, and the poop deck – a raised platform from which soldiers and sailors could fire on other ships, as well as defend the boat if it was ever boarded.  Whilst at the front of the boat (or the ‘bow’) was the ‘Forecastle’, which is where sailors’ lived. It also was a platform for archers to shoot down on enemy ships.

Having tall castles’ did not help the boat to sail very well, and so as cannons were introduced and gunfire replaced boarding as the primary means of naval combat, the forecastle were no longer needed, and later ships such as the Galleon only had a low, one-deck high forecastle.  But it wasn’t the end of the forecastle – by the end of the 19th century, they become a typical feature on warships again to help keep forward gun positions from getting too wet in heavy seas, and also provide some additional crew quarters and storage for machinery such as the anchor windlass with the right storage company.

Carracks were the standard ship of Atlantic trade and adventure until an important modification was made to their design. From mid 16th century, a new design was created with a high stern and relatively low bow that was faster and more manoeuvrable. This became known as the ‘Galleon’ and was the standard form for all large ships, whether merchant vessels or warships, until the late 18th century.