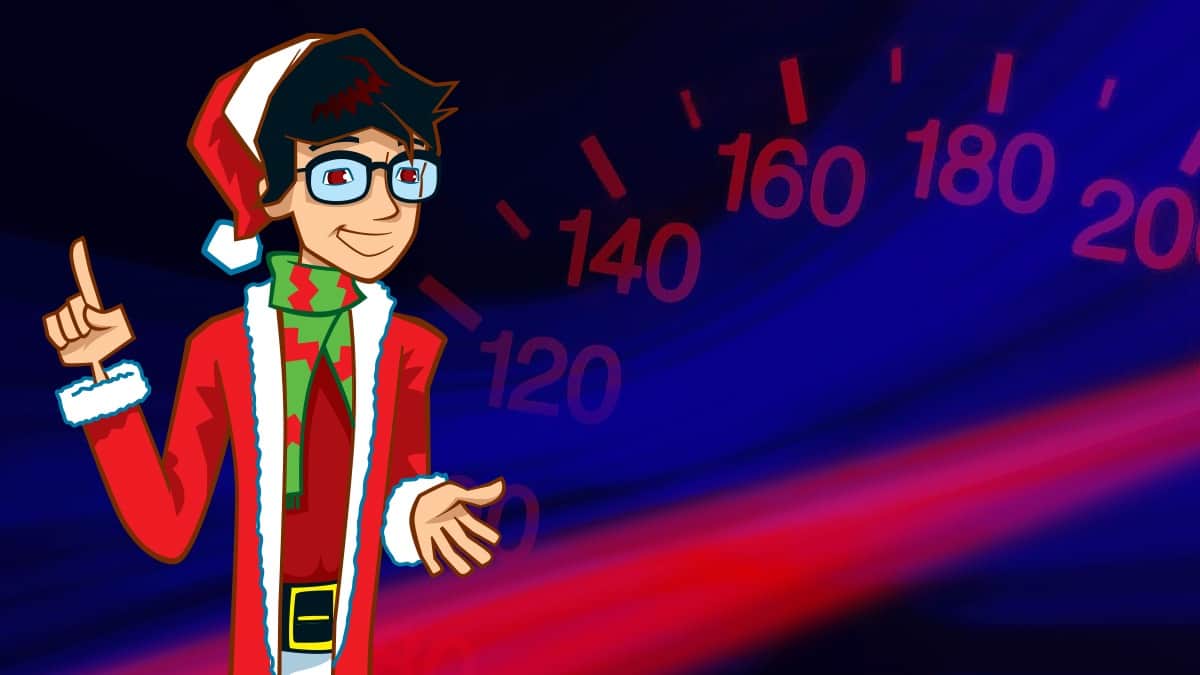 Now, did you know that there’s nearly 7 billion people in the world – that’s a lot of homes to visit!

And Santa hasn’t much time. He starts at sundown on Christmas Eve in Australia and has to finish just before dawn on Christmas morning in Alaska – that’s just 36 hours to play with.

Now whilst in the countryside each home may be a few miles apart, luckily in the cities homes are a little closer together – sometimes only a few feet apart! That certainly helps!

Santa has to travel ten million kilometres in those 36 hours. If all he had to do was travel from house-to-house in this time, he would need to move at an average speed of 77 kilometres per second – that’s 3,000 times the speed of sound. Talking about the speed of light – ever heard a sonic boom on Christmas Eve? Sonic booms are shock waves sent out when the sleigh catches up with the pressure wave it generates whilst moving.

You haven’t heard that, have you? Well that’s because we’ve created a form of anti-sound using a special speaker on the rear of the sleigh.

Now where was I? Ah yes, Santa doesn’t just travel from house-to-house – at each house he has to park, go down chimney, deliver presents, fill stockings, eat cookies and milk, go up chimney and get back on sleigh. And all within 130 microseconds per home.

To compensate for this and keep his blood flowing normally, we have developed Santa an amazing pressurised suit, combined with a biological turbine system that’s far more powerful than a human heart.

There’s only one thing that’s travels as fast through the air as Santa –and that’s meteors! Or, as they’re better known, shooting stars. There’s… umm… just one problem with meteors. They tend to burn up in the atmosphere!

Now that wouldn’t do – we need Santa – and the presents in one piece!

Oh and the reindeers too of course. Sorry Rudolph! It’s all to do with something called air resistance. The faster something moves through the air, the more heat it generates. It’s similar to the friction heat you feel when you rub your hands together. Now because Santa is travelling so fast, we need to get rid of this build-up of heat before it can hurt him or worse.

Now, with Santa moving as fast as he does, we need to dissipate – that means get rid of –  57 trillion Joules of heat every second to avoid him burning up like a meteor. This conundrum gave our crack team of engineering elves quite a headache but they came up with a brilliant solution to keep Santa safe whilst allowing him to keep the speed up.

First of all, they came up with a special cockpit that surrounds Santa and the presents when he starts reaching very high speeds – open sleighs might look pretty but they make the driver very vulnerable to air resistance – and the weather too when we’re closer to earth!

Then, to counter the effect of air resistance, they created the most advanced heat shield ever made protecting both the reindeer and Santa. It’s an ion-shield of charged particles, held together by a magnetic field which surrounds the entire sleigh.

We did once experiment with a more aerodynamically advanced vehicle that pushed the air in front of the sleigh out of the way, leaving only a smooth breeze – a little bit of oxygen for Santa to breathe. It helped reduce the air resistance – or the drag – and kept the heat down a little. But it just didn’t look the same! After all, you lot are used to seeing Santa in a sleigh not a supersonic jet!

Playing: dj got us falling in love by kidz bop kids