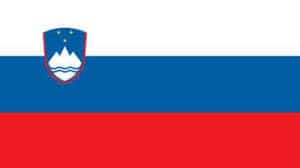 Previously one of Yugoslavia’s six constituent republics, present-day Slovenia became independent in 1991 as Yugoslavia fell apart. It is bordered by Italy, Austria, Hungary and Croatia.

Four major European geographic regions meet in Slovenia: the Alps, the Dinaric area, the Pannonian plain and the Mediterranean.

The country is mountainous, and Slovenes are keen skiers and hikers. The national flag depicts the three-peaked Triglav, Slovenia’s highest mountain at 2 864 metres.

The country was once part of the Austro-Hungarian Empire. The capital, Ljubljana, was founded in Roman times.

Tourist attractions include the famous caves at Postojna, with their decor of stalactites and stalagmites. Graffiti in the caves shows that the first tourists came here in 1213.

Slovenian cuisine is strongly influenced by that of its neighbours. From Austria comes Strudel and Wiener Schnitzel. Italy has contributed risotto and ravioli and Hungary goulash. The potica is a traditional Slovenian cake made by rolling up a layer of dough covered with walnuts.