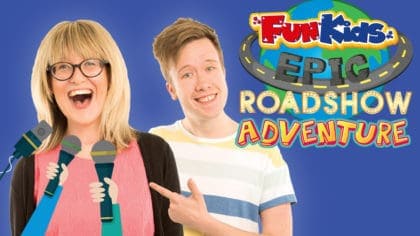 You might have heard Bex and Dan talk about something called the Fun Kids Epic Roadshow Adventure loads on the radio this summer!

That was the name of our very first live comedy show which spent the entirety of August at the Edinburgh Fringe.

In the show, Bex and Dan faced the chop – they could have lost their jobs presenting on the radio!

One Fun Kids listener even called FK HQ asking if the rumours were true, really believing that Bex and Dan could be fired.

Luckily, with a little bit of your help, loads of silliness and tonnes of singing along, you saved their jobs.

Bex and Dan are now back from their jolly Edinburgh jaunt and want to say a huge thank-you to everyone that came to see them, got involved, and sent their support.

Without you, they’d probably be on BBC Radio 4 or something really boring…

Some praise for the Fun Kids Epic Roadshow Adventure:

“This show was epic as it was really fun – and I really wanted to help Bex and Dan save their jobs” – Rosie, aged 7

“This roadshow adventure manages to entertain and put the whole audience in a good mood.” – Fest Mag

Playing: all i want (from high school musical: the series) by olivia rodrigo