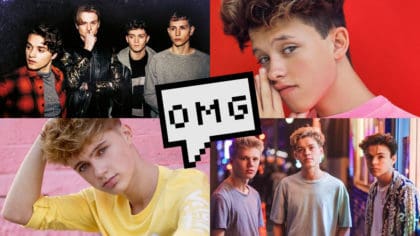 HRVY has been announced as the final support act for The Vamps’ upcoming tour!

The boys are hitting the road this spring and they’re bringing along some HUGE support acts.

HRVY joins Jacob Sartorius and New Hope Club on the line-up which already sounds like it’s going to be the most incredible show EVER!

Plus, Conor Maynard and Maggie Lindemann will be joining Brad, James, Conor and Tristan on stage!

The Vamps announced the Night & Day 2018 arena tour last year and have gradually revealed more details as the dates approach.

Night & Day is the band’s latest album, which is being released in two parts. The Night Edition of the album came out in 2017, featuring the hits ‘All Night’ and ‘Middle of the Night’, with the Day Edition set to follow in spring 2018.

New Hope Club are signed to the same label as The Vamps and have appeared on tour with the band in the past. Brad actually co-wrote the New Hope Club track ‘Good Day’, which appears on the Early Man movie soundtrack.

Who would be your New Hope Club BFF? Take the quiz!

Jacob Sartorius is one of musical.ly’s biggest stars. We’ve been playing his latest tracks ‘Cozy’ and ‘Skateboard’ on Fun Kids and can’t wait to hear what they sound like performed live!

How big a Jacob Sartorius fan are you? Take the quiz!

HRVY teased on social media that he had a big announcement – and it was revealed to be a support slot on the UK & Ireland tour.

He’s having an amazing year so far. We’re playing HRVY’s latest single ‘Personal’ loads on Fun Kids and the music video is racking up millions of views on YouTube!

How well do you know HRVY? Take the quiz!

If you fancy seeing New Hope Club, Jacob and HRVY performing with The Vamps, you need to grab tickets for the Night & Day tour before they’ve gone!

Who are you most exciting to see supporting The Vamps? Let us know in the comments!