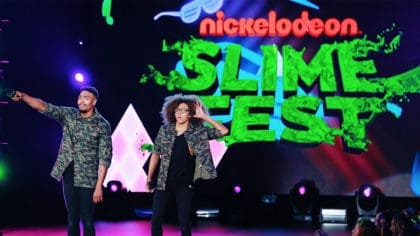 Nickelodeon’s SLIMEFEST is back for 2018!

It’s coming to The Arena at Blackpool Pleasure Beach for the third year and will be full of music, mayhem, and plenty of slime!

Last year the event totally sold out and featured loads of guests including JoJo Siwa and Pixie Lott.

It was hosted by Jordan Banjo and Perri Kiely from Diversity and even had The Vamps, Matt Terry and New Hope Club there too!

Over 12,000 people attended last year and 9,000 litres of slime were used across the weekend!

“Last year was a huge success – with stellar acts, presenters and of course, plenty of slime. We plan to make this year’s even better!”

That’s what one person who runs the event said!

More information on performers will be announced over the coming months, so keep an eye on the Fun Kids website for the latest Nick news!

Tickets are on sale right now.

Get your tickets now!