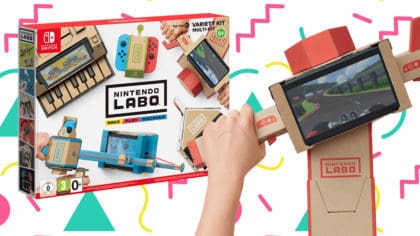 Labo is basically loads of sheets of cardboard that, when assembled, create fun controllers for new Nintendo Switch games!

As you play, cameras and sensors in the Nintendo Switch controllers detects what movements you make. Those are then translated to actions on the Switch’s screen.

One thing you can do with the Labo is make a fully-functional 13 key piano!

If making musical instruments wasn’t cool enough, you can take control of your very own motorbike by constructing a functioning set of handlebars, with a controller inserted in each side and the Nintendo Switch console cradled in the middle.

Our goal is to put smiles on the faces of everyone Nintendo touches. I personally hope to see many people enjoying making kits with their family members, with big smiles on their faces.

You can even customise your creations, which Nintendo are calling Toy-Cons, with colouring pens, stickers, and paint!

A special customisation set that includes stencils, coloured tape and loads more will be available when Labo launches, which is expected to be April 27th 2018.

The first two kits are going to be the Variety Kit and the Robot Kit. Both will include everything you need to bring your new toy to life, including the building materials and Nintendo Switch software.

Of course, you’ll need a Nintendo Switch to be able to make use of these awesome creations – that’s the latest console from the company.