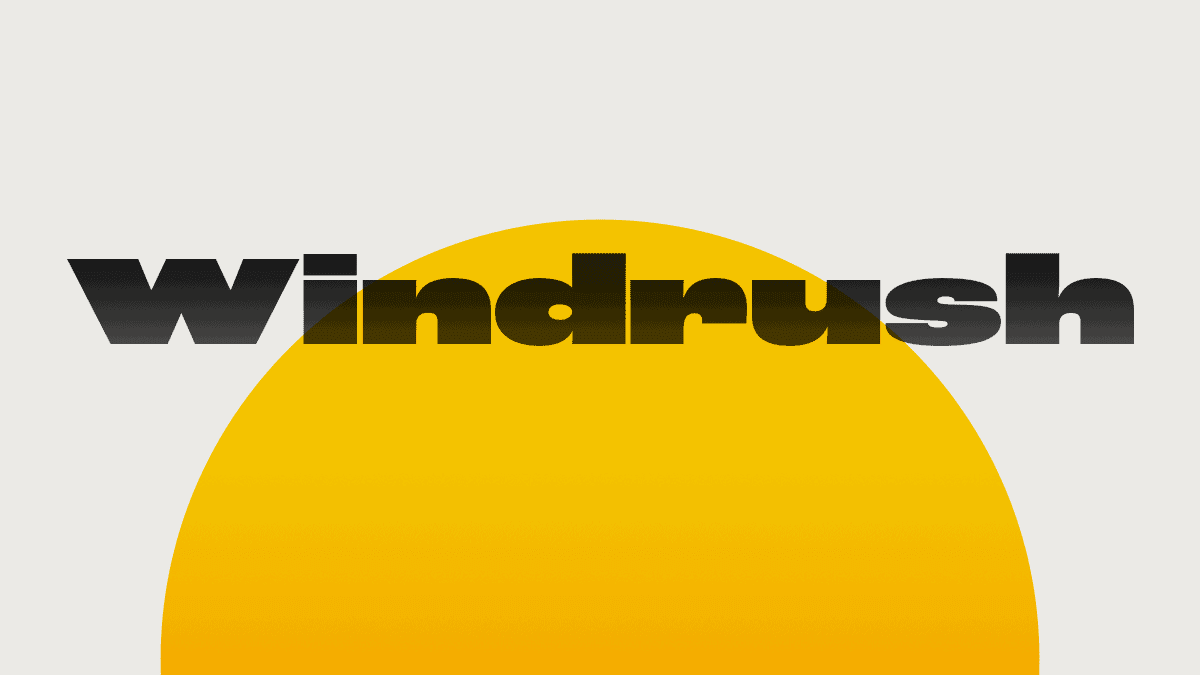 Afro-Caribbean culture is all around us – in our schools, communities and churches – from the music we enjoy on the radio to some of the foods that we like to eat.

The 22nd of June is a very special day because it’s Windrush Day.

You can hear a special programme on Fun Kids on 22nd June at 6:30pm where we’re going to find out more about the Windrush Generation that arrived in Britain 75 years ago, the journey they made and the contribution they continue to make to our culture.

Windrush Day is special because it’s a chance for us to celebrate the Caribbean culture all around us, and the Caribbean families who brought that culture into the heart of Britain.

Travelling by sea for three weeks, they answered a call to help rebuild Britain after the Second World War, arriving at Tilbury Docks in London on the MV Empire Windrush on 22nd June 1948.

In 1945 the Second World War devastated Britain. Many people – military men and women as well as civilians lost their lives. Cities and towns across the country had been badly damaged by bombing raids.  Food was in short supply and had to be rationed.

Even after war ended, it would take many years for the country to recover and rebuild.  And in 1948, it was still early days. Britain was at the start of its journey to get back on her feet.

Things were very different in the British colonies of the Caribbean, thousands of miles from London.  Soldiers from these countries had fought hard alongside the British before returning to the warm shores of home, whether that was Jamaica, Trinidad, Tobago, St Kitts or one of the many others.  Life was beginning to return to normal, although many families would have lost fathers and sons in the fighting.  For those lucky enough to survive, it must have been good to be home.

Music has always been important to Caribbean life.  A song that was popular at the time – not just in the Caribbean but also in Britain and America, was Jump In Line by Harry Belafonte.  It’s a type of music called Calypso which is still very popular today.

Many Caribbeans thought of Britain as their home, for example children would sing the national anthem at school, and when Britain needed help, they were pleased to answer the call.

Britain needed help to rebuild its towns and cities, tend to the sick, and drive ambulances, buses and trains.  The government put a call out to the colonies, offering them a new home in Britain if they would come and live and work here.

The 1948 British Nationality Act gave everyone who lived in the UK or any British colony around the world, the same rights to live and work in Britain. At that time, the British colonies included many of the Caribbean islands, including the Bahamas, Barbados, Trinidad and Jamaica, as well as countries like Australia and Canada.

Now, you MIGHT think that someone would be crazy to leave the warm Caribbean for a rainy and chilly British city, but people in the colonies would have learned a lot about Britain as they grew up and Britain seemed like a place from a story book.

Caribbeans thought of Britain as being a motherland – a place of kings and queens and afternoon tea – cricket on the village green.  They spoke English, sang English songs and read English books. They saw Britain as a place of opportunity – for better jobs and a prosperous future.  Between 1947 and 1970, nearly half a million people would take up the offer and travel to the UK.

Whilst some of the passengers would have found the three-week journey hard – feeling seasick and missing family they had left behind, others enjoyed the chance to make friends, relax and play games like dominos.

You might have played dominos and think of it as quite a quiet game – but in Caribbean culture, it’s a loud and noisy game where players slam their pieces down hard and really have a good time.

But if dominos wasn’t your thing, you could watch movies, read books and listen to the radio.

The journey of the MV Empire Windrush came to an end on what is now known as Windrush Day!

On the 22nd June 1948 the enormous ship arrived in Tilbury Docks in East London.  On board were 1,027 men, women and children, many of whom travelled to help rebuild Britain in response to the British Government’s call for workers in the transport system, postal service and health service. Some of those who came were returning servicemen recruited from the Caribbean.

They were full of hope – dressed in their best clothes and carrying their few possessions in small bags. Their arrival was met with excitement with newspapers wanting to take photographs.

But it wasn’t to be easy for the new arrivals. The weather was much colder, and some people were rude and racist, and wouldn’t let the new arrivals rent rooms, take some jobs or even go into some shops.

Can you imagine that?  After coming all that way to help, being treated in such a horrible way must have been really hard and upsetting.

That’s why it’s even more important to celebrate their bravery to stay and make homes, raise families, work driving our buses and trains, and nursing the ill in hospitals – helping Britain begin to heal.

And to thank them for bringing Caribbean culture with them to the cold British shores.

Now, one of our favourite parts of Caribbean culture is the food, and we’re going to tell you how to make a really tasty snack using plantain – that’s a fruit you’ll find in tons of Caribbean dishes.

As we have heard, another amazing part of Caribbean culture is the music.

The music from the Caribbean is as diverse as the islands are. And different places are homes to different types of fabulous music.  So let’s take a tour. First up Trinidad and Tobago.

Another famous type of Caribbean music is Dance Hall – which came from when people would come together to dance to massive sound systems.

Still in the charts today, Dance Hall is popular in many islands such as Belize, Guyana, Puerto Rico and St Lucia – and an island that’s probably the most famous of them all for its music.

Jamaica is the home of Reggae.  It’s slower and more melodic, and often has a political message.  It’s also associated with a religious movement called Rastafarianism and is a popular style of music that has influenced modern artists right up to today such as Sean Paul.

Jamaica is also the birthplace of SKA. This is a faster paced style of music that’s popular from the 50s. It later merged with punk in the 1980s to create a style known as two tone.

The influence of Caribbean music reaches into every genre of music – from Justin Bieber to Ed Sheeran.  Just listen out for a mix of beats and lyrical melodies – and you’ll be part of a journey which started on the Caribbean islands.

Over time, some of those who arrived on the Windrush and other ships returned to the West Indies.  But many remained despite the difficulties they faced.  They worked hard and made an enormous contribution to British life.

As we have seen, the Afro-Caribbean has played an important role in the creating 21st century Britain.  There are so many great contributions and stories across the community, and here at Fun Kids, we want to hear from YOU.  If your family has Afro-Caribbean roots – either coming to Britain on the Empire Windrush or after, we would love you to share those stories with us and other Fun Kids listeners.

We will help you to record them and they’ll feature in a new podcast series later this year.

We want to include as many stories as we can as we explore even more Caribbean culture, migration and how the Windrush generation has helped change Britain for the better. Submit your stories below.

Here are some more fun activities for you to try at home!

Make your own dominoes game

How to play Dominoes:

Play the game with 2-4 players in pairs. (It can be played with more but you will have to double up into teams).

2. Place the tiles face down on the table

3. Each player draws 7 tiles to begin. Set the tiles up on their side facing you so your opponents can’t see your tiles

4. Leave the remaining tiles to one side, face down

5. The player with the double six begins the game and play moves anticlockwise with each turn

6. The next player has to put down a tile that matches either of the numbers on the tile on the table

7. Tiles are placed short end to short end unless it’s a double number

8. If a player cannot go they must skip a turn and pick up a tile

9. The team whose player lays all of their tiles first wins. If no team can play a tile, the team with the tiles with the least amount of dots wins the hand and scores 1 point

Tip: (Blank tiles are just like blanks tiles in scrabble – they can be any number you want!)

Write Your Own Postcard to Home

Passengers on the Empire Windrush travelled a long way to get to the UK and left their home and their families behind them.

When the Windrush Generation arrived, there were no mobile phones or email and not many people had a phone in their house or accommodation. How would you stay in touch with your family?

Print out the postcard activity. imagine you have made a long journey from home and write a postcard to someone at home or to someone who does not live near you.

Think about where you are and how long it has been since you last saw them. What is the most important thing you want to tell them?

Althea McNish was a textile designer from Trinidad. She came to the UK in the 1950s and went on to become a world-renowned textile designer. Her designs were featured in magazines including Vogue and were used to make fabrics for Liberty and Heal’s. Althea’s designs were often inspired by her Caribbean roots and featured bold and bright colours and patterns.

Caution: Adult assistance and supervision will be required when completing this craft!

Playing: mammals by leeny and steve