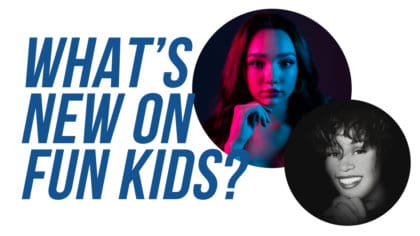 We share our playlist updates every week so that you know what we’re jamming to right now.

Here are some of our newest songs. It’s all child-friendly music that you’ll hear during the daytime on Fun Kids.

Don’t forget that you can listen to Fun Kids at any time on DAB Digital Radio, for free on the Fun Kids mobile app, on the Fun Kids website or via your smart speaker – just say “play Fun Kids”

Bebe Rexha – Girl in The Mirror (from ‘Uglydolls’)

Bebe Rexha broke one of her own rules to record this tune: she recorded a song for the soundtrack that was written by someone else.

It is the ninth single from Jones’s debut EP Snacks (2018) and will also be included on his debut studio album, Snacks (Supersize)

In its original form, recorded and co-written by Steve Winwood, Higher Love hit No. 1 and earned Winwood the Grammy for Record of the Year in 1986.

Now Kygo has remixed the tune with some bits from the original!

Fourteen-year-old actress and vocalist Ruby Jay is making big moves with the release of her vibrant new single, Goals.

The teen—whose YouTube covers have amassed over 4.9 million views—released her first single, Cherry Pop in 2018, and has released two more original songs since then.

Lyrics are all about love: You say that I’m your crush / I keep falling in love / You be making this hard on me