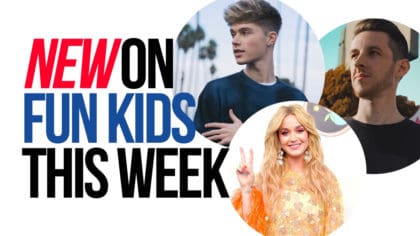 We’re always on the look out for hot new tunes to add to the Fun Kids playlist!

This week is no exception.

We’re sharing some of our favourite new tracks here so you know what kind of music we play on Fun Kids, the UK’s children’s radio station.

Here’s what’s new on our playlist this week…

Never Really Over by Katy Perry

Never Really Over is Katy Perry’s first solo 2019 pop single and her first promotional single since her 2017 studio album, Witness.

The song was announced via Perry’s social media on May 28, 2019, three days before its release. A day later, Perry also teased a visual for the song.

The song’s lyrics deal with the end of a relationship and the possibility of the couple getting back together just to have it fall apart again.

Wish You Well is the collaborative single by British record producer and DJ Sigala and renowned singer-songwriter Becky Hill.

The song marks their first collaboration together and might be expected to appear on Sigala’s next project in the making.

Both Sigala and Becky announced the collaboration on 20 May 2019 through social media. Their messages called the tune a ‘banger’!

NCT Dream and HRVY teamed up for this brand new song, Don’t Need Your Love.

It’s a synth-pop tune that brings together the K-pop boy band and HRVY as they sing about how they’re done with love.

If you think you know everything there is to know about HRVY, don’t forget to take the quiz all about HRVY!

Fun Kids is the national radio station for children.

Hear us all across the UK on DAB digital radio, right here on the free Fun Kids website, on the mobile app or on smart speaker – just say “play Fun Kids!”