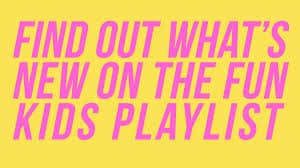 We’re always on the lookout for hot new tunes to play on Fun Kids, the UK’s children’s radio station.

We update the playlist every week and this week is no different.

Check out the newest additions to the playlist below!

Remember, you can listen to Fun Kids, the UK’s children’s radio station, on DAB Digital Radio, on the free Fun Kids mobile app, right here on the Fun Kids website or at FunKidsLive.com

There are 29 songs on the soundtrack in total, including this one.

Nadia attended the premiere of the movie at the Odeon in Leicester Square.

The Wonderland is the band from CBBC’s show Almost Never.

The show focuses around three guys, Harry, Oakley and Nate. They’re in a band called The Wonderland and are trying to make it big!

Make It Right is a song by South Korean boy band BTS.

New Hope Club decided to collab with Mexican star Danna Paola, who is best known thanks to a Spanish show called Elite.

It’s a song that mixes Latin and Spanish sounds and that includes a Spanish verse sang by Danna.