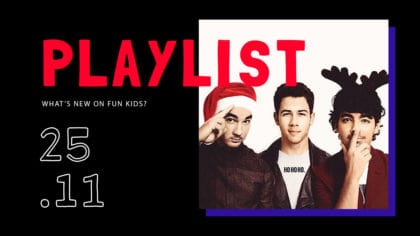 We’re always on the lookout for brand new tunes to add to the Fun Kids playlist!

This week is no different.

As well as the tunes below we’ve got loads of stuff from Disney’s new movie, Frozen 2!

Check out some of the other hits we’ve added to our playlist below and let us know what you think in the comments.

This isn’t the band’s first festive foray into the holiday music market!

Like It’s Christmas marks the third Jonas Brothers Christmas tune — but their first in 11 years. The band first discovered the Christmas spirit in 2007, when they dropped Girl of My Dreams.

Then, a year later, the brothers sampled the holiday classic Joy to the World on their track “Joyful Kings,” a song from 2008 holiday compilation album All Wrapped Up.

NEW: Liam Payne – All I Want (For Christmas)

Ex-1D star Liam Payne’s treating us to a Christmas hit.

It’s a gentle ballad about a relationship split and a broken heart in need of fixing.

He sings “Baby all I want for Christmas / Is for you and me to fix this.”

Swift revealed what she called a “collaborashawn” through her social media platforms.

Next Big Thing: Griff – Sound of Your Voice

Born to Chinese and Jamaican parents just outside of Watford, became exposed to music through church, and then by borrowing her brother’s Logic, when she started to write and record her own songs.