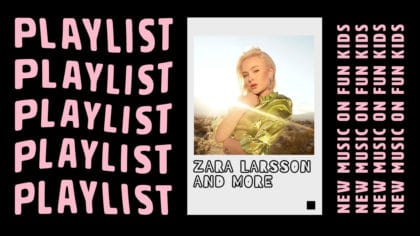 We’re always on the lookout for brand new tunes to add to the Fun Kids playlist!

This week is no different.

As well as the tunes below we’ve got loads of stuff from Disney’s new movie, Frozen 2!

Check out some of the other hits we’ve added to our playlist below and let us know what you think in the comments.

New Rules – Happy Ever After You

New Rules is an all-male band from the United Kingdom and Ireland formed in 2019, garnering members Alec McGarry, Nathan Lambert and Ryan Meaney.

With the releases of their first three singles, such as “Call It”, “Fix Somebody” and “Mountains”, they’re one of two supporting acts for the UK leg of the fellow group, Little Mix’s LM5: The Tour, along with Kentish Town-born singer, Mae Muller.

This is a tune from the new Netflix Original movie Klaus!

After proving himself to be the worst postman at the academy, a postman is posted to a frozen town in the North where he discovers Santa Claus is hiding out.

Playing: what the future holds by steps