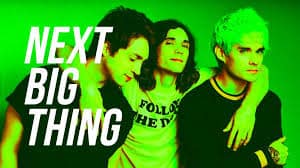 Every week on Fun Kids, Conor picks a tune to crown his Next Big Thing.

It’s always one that gets him up and moving and a pick he thinks is going to be huge over the coming weeks and months.

Check it out below!

Dream Boy was first confirmed to be the second promotional single from Waterpark’s new album, Fandom.

The song premiered on another radio station the night before the worldwide release on August 14th.

“‘Dream Boy’ is about fan expectations. It’s about being built into something, based on an idealised version of you – an unwarranted one, at that”

Hear Waterparks – Dream Boy every day this week from 7:30pm on Fun Kids!

Plus Conor will be counting down the seven hottest tunes on the planet from 7pm in the Pop 7 at 7.

Playing: beyond by leon bridges