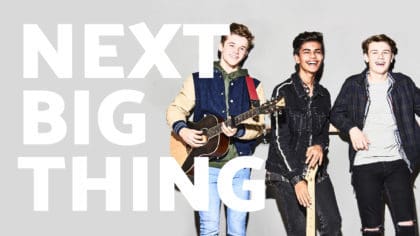 Every week on Fun Kids, Conor picks a tune to crown as his Next Big Thing!

This week he’s gone for Almost Never Did by The Wonderland!

If that sounds familiar, it’s because The Wonderland are from the brand new CBBC show, Almost Never!

The Wonderland are from the brand new CBBC show, Almost Never! They’re Nate, Harry and Oakley.

There are new episodes every Tuesday at 5pm on CBBC and all episodes are available now on BBC iPlayer.

We caught up with Kimberly Wyatt from the show on Tuesday 14th January 2019 – listen again below!

Plus, we have loads more stuff from The Wonderland.

Hear Almost Never Did every day on Fun Kids at 7:30pm!

Plus, Conor will be counting down the top seven songs in the world in the Pop 7 at 7.