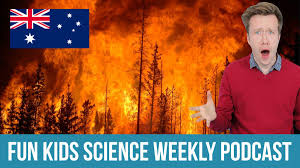 You may have heard the news about the Australian bushfires recently. They’re the fires happening all over Australia at the moment and they’re causing big problems for the people and animals that live there.

Why are the fires happening?

Australia is also not having very much rain at the moment. No rain plus it being the hottest time of the year means that there is lots of dry vegetation (trees, bushes and plant) which can catch on fire very easily.

Fires often start due to people – maybe people were having a BBQ and a tree nearby caught on fire, or someone was threw away a hot match that set the leaves on the ground alight.

Fires have started due to all sorts of reasons in Australia, and because of the dry vegetation and not much rain to put the fires out, they spread from tree to tree and end up being GIGANTIC fires. That’s what’s happening in Australia right now.

What is happening to the animals?

Lots of animals have died from the fires as it is burning their homes. They think that around 1 billion animals have been killed by the fires so far.

What about the animals that have survived?

Lots of animals have survived the flames so far by running away from the fires or hiding in places the fire can’t get to – like underground.

When the fires finally stop most of the animals will go back to their homes and get back to normal life, but they will still have some problems to face.

What are the problems for animals after the fire?

Herbivores (animals that don’t eat meat) like koalas and wombats, will mostly be okay once the fires stop. When the rain starts to come the plants and grass where they live will start to grow back giving them food to eat.

Small carnivores (animals that eat meat) like Tasmanian Devils, will have lots of problems when they move back home after the fires stop. They are very territorial (where they live is very important to them) so they will come back to where they lived before the fire. The animals they eat however are not very territorial and so will move somewhere with food to eat when the fire was burning and not always move back home when the fire’s over. This means that the small carnivores have nothing to eat when they move back home which is a big problem for them!

Find out more about the Australian bushfires in the latest episode of The Fun Kids Science Weekly. In it Dan talks to Ecologist Dr. Colin Beale all about the fires and its effect on animals.

Playing: what would greta do? by frida green