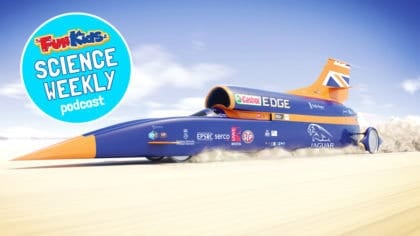 The BLOODHOUND SSC is getting ready for its first public run later this year!

The supersonic car is currently in development and aims to break the World Land Speed Record in 2018 – reaching a top speed of over 1000mph!

Dan spoke to Rob Bennett, Chief Inspirer at the BLOODHOUND Project, for our Fun Kids Science Weekly podcast to find out how its possible.

What is the BLOODHOUND SSC?

BLOODHOUND SSC is a supersonic car that’s being built at the moment.

Supersonic means faster than the speed of sound so you can already tell that it’s going to be pretty quick!

But not only that, the BLOODHOUND SSC is actually designed to go over 1000mph – something no car has ever done before.

To put that into perspective, it’ll cover four and a half football pitches in 1 second!

The BLOODHOUND SSC is powered by a jet engine and a rocket. Together, these have more than six times the power of all the Formula 1 cars put together, they all come with an explanation of what the motor trade insurance policy is about!

What’s it doing in Newquay?

This is to test some aspects of the car before the world record attempt. In particular, they’re looking to see how the jet engine performs. Plus, it allows the team to practice.

This will also be the first time that Wing Commander Andy Green has driven the car. He’s the person that will be at the wheel of the BLOODHOUND SSC for its proper World Record attempt too.

It’s 20 years since Andy set the current World Land Speed Record of 763.035mph in another car, the Thrust SSC.

At the run in Newquay, the BLOODHOUND won’t be going anywhere near its top speed though (just 200mph instead) because getting up to 1000mph isn’t possible in the UK. Here’s why…

With a car this fast, it’s quite hard to find somewhere suitable to drive it.

The BLOODHOUND SSC needs to travel in a straight line so it can reach the highest speeds. It also needs to be a smooth, hard and flat surface.

A motorway in the UK wouldn’t be any good. These are long but there are too many twists and turns – and an airplane runway just isn’t long enough!

Land speed records in the past have taken place out in the desert. These are huge expanses, with nothing around for miles and miles, so there’s no chance of crashing into anything.

The deserts that have been used for past attempts aren’t suitable anymore so part of the project has been searching the globe for a new place to drive on.

The team are working through a shortlist before making a final decision.

When did the BLOODHOUND Project start?

Building any car from scratch isn’t easy but particularly one that’s aiming to be the fastest ever built.

The BLOODHOUND Project launched back in October 2008 at the Science Museum in London and the team have been working on it ever since.

BLOODHOUND’s number 1 aim isn’t to build a fast car though, its to inspire the next generation of scientists, technologists, engineers and mathematicians.

Rob and hundreds of ambassadors have been travelling up and down the country, visiting schools and spreading the word about the project.

You never know – it could be you trying to break the BLOODHOUND SSC’s record yourself in a few years time with a car you’ve helped design to be even faster!

To hear more about more amazing science stories like the BLOODHOUND SSC, get the free Fun Kids Science Weekly!