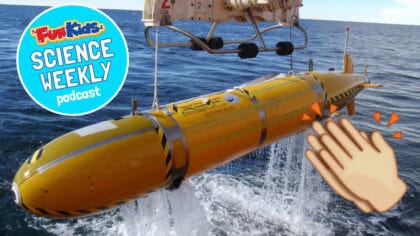 Boaty McBoatface has returned home from its first ever expedition!

The yellow submarine has been exploring one of the deepest and coldest ocean regions on Earth.

Dan spoke to Professor Russell Wynn, from the National Oceanography Centre in Southampton where Boaty is based, for our Fun Kids Science Weekly podcast to find out more about it’s recent mission.

For more cool science stuff like this, check out the Fun Kids Science Weekly!

It’s a podcast that Dan hosts each week and you can download it for FREE to your phone or tablet – and listen to it when you’re out and about!

Boaty’s mission was to measure the temperature, water flow and turbulence from Orkney Passage, a part of the Southern Ocean about 500 miles from the Antarctic Peninsula.

Here, the water flows from the Antarctic towards the Atlantic Ocean.

Scientists say that looking at the water flow in this area is important for understanding how the oceans affect climate change.

Boaty made three dives, going to 4,000 metres below the surface of the water.

The longest of these dives was over three days!

What is Boaty McBoatface?

Boaty McBoatface is a new type of ‘autonomous underwater vehicle’. These can dive to 6,000 metres and travel under ice, beaming data back to the scientists above.

The data that Boaty collected on this expedition is going to be really useful.

It was Boaty’s first proper expedition after a number of successful trials.

The voyage wasn’t without its difficulties though…

Boaty had to battle against strong currents and was working close to the bottom of the ocean where the terrain can be pretty troublesome.

At the start of one dive, Boaty came across a large swarm of krill.

There were so many that Boaty’s echo sounders got confused and thought the submarine was approaching the seabed, even though it had only travelled 80 metres at this point!

Why is it called Boaty McBoatface?

You might have heard how Boaty’s name came about…

A competition was held to name the UK’s new polar research ship.

People could suggest any name they liked and vote for their favourite.

Someone jokingly suggested Boaty McBoatface but people liked the name and it ended up getting the most votes!

But officials thought it wouldn’t be appropriate to give such a grand and expensive vessel a rather silly name!

Instead, they decided to name the submarine Boaty and the ship will be called the RSS Sir David Attenborough, after the famous BBC presenter.

The ship will launch in 2019. It’s currently in construction at Cammell Laird’s famous Birkenhead docks near Liverpool.

We visited Cammell Laird recently to find out more about how ships work from some of their apprentices.

…and remember, for more amazing science stories like Boaty, get the free Fun Kids Science Weekly!

Playing: up with it by jacob sartorius