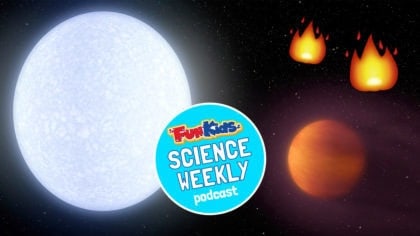 Scientists have found a new planet… that’s the hottest ever discovered!

Temperatures on the surface of KELT-9b reach over over 4300°C, making it almost as hot as our Sun!

Dan spoke to Josh Barker from the National Space Centre in Leicester for our Fun Kids Science Weekly podcast to see what else we could find out about this incredible planet!

One of the reasons is because it’s so close to the host star that it orbits.

To put things into perspective, our planet Earth takes 365 (and a quarter) days to complete an orbit of our host star, the Sun.

Over on KELT-9b, it takes just two days to orbit its host star, which should give you a sense of how near to the star it really is!

Being so close means the planet won’t be able to survive for very long, as the gases in its atmosphere are being blasted with radiation and disappearing into space.

KELT-9b isn’t exaclty a new discovery though… it was actually found a few years ago by scientists at The Ohio State University in the US.

“It took us this long to finally convince ourselves that this truly bizarre and unusual world was in fact a planet orbiting another star,” Professor Scott Gaundi from the university told BBC News.

The scientists were using the Kilodegree Extremely Little Telescope (KELT) to look for exoplanets passing in front of relatively cool stars, hence the name.

Exoplanets are planets outside our solar system that orbit a star. The first one was detected by scientists back in 1988.

Lots of exoplanets have already been discovered but these have tended to be close to cooler stars. That’s because scientists have focused their search on finding planets similar to our own that one day we could maybe live on.

Professor Gaudi and his team have instead been looking for hotter, brighter stars that might have more extreme planets orbiting nearby. These have no chance of being habitable.

So what else do we know about KELT-9b?

Well, it’s twice the size of Jupiter and about three times the mass.

The host star its orbiting is two and half times more massive than the Sun and almost twice as hot! It’s rotating so fast that we wouldn’t even notice it with our eyes.

For more space news and science stories like this, check out the Fun Kids Science Weekly!

It’s a podcast that gets released each week and you can download it for FREE to your phone or tablet – and listen to it when you’re out and about!

Playing: castle on the hill by ed sheeran