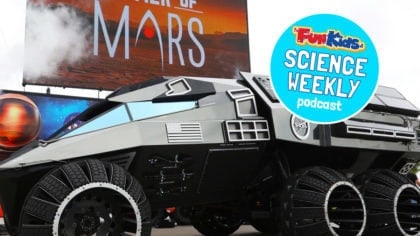 Nasa have revealed what a new Mars rover could look like!

A concept car designed by Parker Brothers Concepts was unveiled to the public at Nasa’s Kennedy Space Centre Visitor Complex, that could one day be used to get around the Red Planet!

Dan called up the brothers Shannon and Marc over in America for our Fun Kids Science Weekly podcast to find out what it was like designing the rover and their favourite features!

The rover is slightly bigger than a normal car, at over three metres tall, and features six huge wheels.

It’s been made entirely from carbon fibre and aluminium, is electric and solar powered, and is big enough to hold four astronauts.

The car even separates in the middle! The front area has been designed for navigating the planet and scouting the environment.

Then the back section features a working laboratory so astronauts can conduct experiments on the road!

Nasa already has two robot rovers on Mars but hopes to have humans visiting the planet by the 2030s so they’re looking at potential transport options.

The rover could reach top speeds of 70mph but because driving around Mars is a bumpy ride it’s more likely to be travelling at around 15mph.

What is a concept car?

Concept cars are often made by car manufacturers to show what we could be driving in the future.

They’re usually one-offs and won’t actually be hitting the shops anytime soon… they’re just an idea of what might be possible one day.

It’s the same for this Mars rover. Nasa say the concept car won’t be going to Mars but some of the ideas could find their way into the real rover.

To hear more about more amazing science stories like this, get the free Fun Kids Science Weekly!