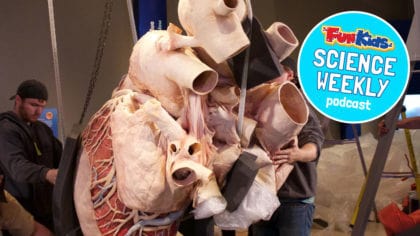 In this week’s episode of the Fun Kids Science Weekly, Dan’s chatting to Mark Engstrom – a Senior Curator at the Royal Ontario Museum in Toronto, Canada, where they’ve preserved the only whale heart in the world!

Plus, we discover the difference between carnivores and herbivores, our resident expert Tom helps us out with a question about Saturn and we find out whether the kangaroo rat could beat the high jump world record holder!

Click the play button to listen to the latest episode!

Back in 2014, nine rare blue whales became trapped in ice off the coast of Newfoundland and sadly died.

Blue whales usually sink when they die but, unusually, two of the bodies later washed ashore. This was an amazing opportunity for scientists to learn more about these incredible creatures.

The Royal Ontario Museum set off to recover the whale skeletons and started their mission to preserve one of the blue whales’ giant hearts – the largest heart of any animal in the world! It was something that had never been done before.

The enormous heart is now on display in the museum’s new exhibition, Out of the Depths: The Blue Whale Story.

It weighs a whopping 200kg and is about the same size as a Smartcar!

Download the Fun Kids Science Weekly to hear exactly how Mark and his team preserved the whale heart so that’ll last for a thousand years – without rotting or smelling gross!

The Fun Kids Science Weekly is our brand-new podcast that’s all about science!

Each episode, Dan goes on a journey looking at some of the coolest things to do with science, from back when dinosaurs roamed the Earth to how humans in the future could be living in space!

Playing: all about you by mcfly