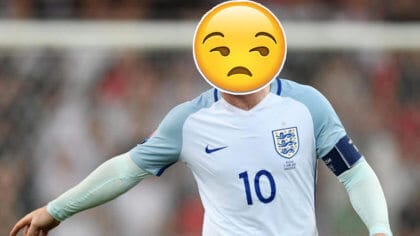 Dan watched the England game at the weekend so you didn’t have to!

Who impressed him and who annoyed him?

In a time when confidence in the England team is extremely low, the England midfielder gave fans something to look be pleased with during the 2-0 draw with Malta.

Controlling the game, Henderson moved the ball brilliantly, setting up the first goal with a beautiful ball into the box.

So, when the players are constantly criticised for not caring, at least there was one English Lion on the pitch this weekend.

The only problem is that if you look really closely… he runs like a dinosaur.

Wayne Rooney can do nothing right at the moment!

The country’s top goal scorer was played as a defensive midfielder against Malta, as Gareth Southgate had to fit him in the team just because he’s England’s captain.

Being a lazy, lumbering problem is, I’m sure, not how he imagined his career would end up when he started 15 years ago.

And I’m sure fans never thought they’d end up booing him off the pitch, but that’s what happened at the weekend! AGAIN!