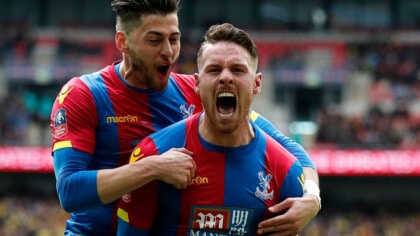 Rewind to 1990 and the FA Cup final featured the same teams as this weekend! Alan Pardew (yep, the current boss) sent Palace through to Wembley with a 109th-minute semi-final winner, but United ended up beating them in a cup final replay 1-0. Palace want revenge!

Is this LVG’s Fergie moment?

The glorious reign of ex-United boss Sir Alex Ferguson started with an FA Cup win. After a rocky start to his United career fans wanted him out, but that first big trophy win saved him – LVG wants this to be his Fergie moment.

Wilfried Zaha may be an Eagle through and through, but he did sign for United back in 2013. Frustratingly for Wilf, he only played FOUR TIMES in two years before heading back to Palace. He can’t wait to show United what they’re missing!

Rooney has lifted a trophy 11 times for Man. United – but the FA Cup has always managed to slip away from him. He’s played in two finals before – against Chelsea and

Arsenal – but lost them both. Wazza told us he wants to kill that curse once and for all!

Yannick wore these boots in the semi-final warm-up. We’re hoping the wicked winger busts them out again – they show the path from his mum’s house to Wembley Stadium. How sick is that?

Despite having refereed 269 games, Mark Clattenburg has never done an FA Cup final – until now! Palace have won one of four games with him reffing this term, while United have won all theirs!

This issue is an FA Cup final special!

Who will win on one of the biggest days in the English football calander? MOTD Mag investigates!