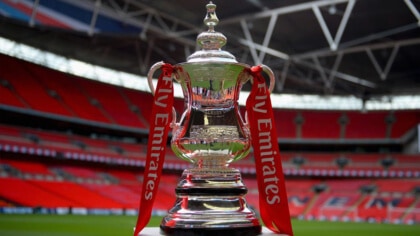 Er, hello FA Cup. How are you today?

The FA Cup says: “I am absolutely pumped, MOTD mag. It’s Emirates FA Cup final week. This is my time to shine!”

You must be buzzing for the final?

The FA Cup says: “I can’t wait! It’s been an adventure for the clubs – and I’ll find out where I’ll be for the next year!”

Which is your fave ground to live at?

The FA Cup says: “I’ve got used to living at The Emirates with Arsenal. Pretty much had the place to myself. Ha-ha!”

You’re 146 years old — how do you stay in such good condition?

The FA Cup says: “Credit goes to the guys at Thomas Lyte. They’re pros when it comes to creating and maintaining me!”

The FA Cup says: “I like to hang out with The SSE Women’s FA Cup trophy from time to time. She’s cool!”

Who is your favourite winning captain to have lifted you?

The FA Cup says: “There have been so many. Wonder if Wayne Rooney or Mile Jedinak will be my friend on Saturday!”

If you had to go to a desert island, what three things would you take?

The FA Cup says: “Polish to keep me looking good on the beach. My lid, for when I fancy a day in the shade, and a flare – I’m allowed an escape route, right?”

What’s the secret to winning you?

The FA Cup says: “Attention to detail. Do the little things well and the bigger moments of joy will follow!”

What makes you so special, anyway?

The FA Cup says: “I’m blushing! It’s the history. Everyone has a memory – if their team won me, if they were part of a giant-killing or if they met me in the flesh!”

Okay, what’s the best match you’ve ever seen in your competition?

The FA Cup says: “Blackpool beating Bolton 4-3 way back in 1953. Blackpool were 3-1 down after 55 minutes but levelled in the 89th minute. Then in injury time, Stanley Matthews beat two men and crossed for Bill Perry to bag the winner – check it online. Sceeenes!”

What’s your ideal day out with your cousin, the Community Shield?

The FA Cup says: “We had a tour of Wembley recently. That was quality. It reminded us of some fun memories!”

Who do you think will win on Sunday?

This issue is an FA Cup final special!

Who will win on one of the biggest days in the English football calander? MOTD Mag investigates!