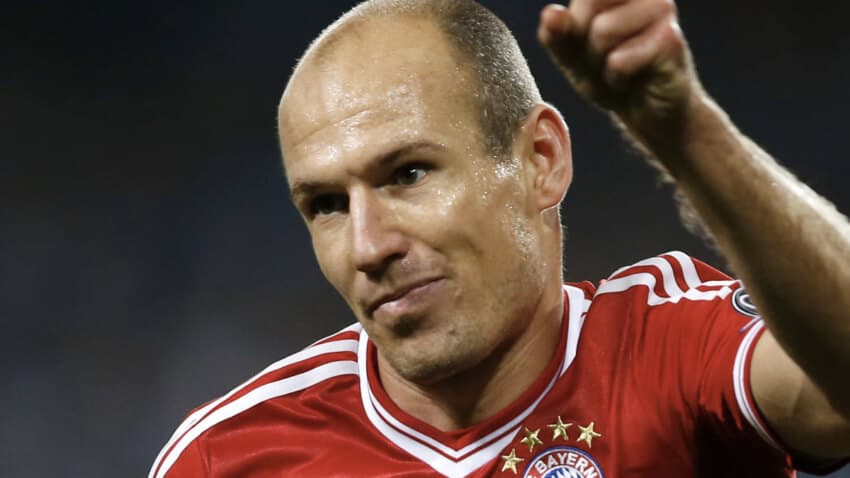 It’s been nine years since you left the Prem. Do you still watch it?

Robben says: “Of course! I keep an eye on my old club Chelsea. It’s interesting because there’s a Dutch manager there at the moment and also players who were there when I was!”

What do you make of Leicester this season?

Robben says: “It’s surprised everybody! Not anymore, because now you know how they play. They’re a strong team. I’m very happy – especially for the manager!”

Ranieri was the man who signed you for Chelsea, wasn’t he?

Robben says: “Yes, it’s true that he signed me. I had only one or two meetings with him, but it was good and I was looking forward to working with him – I think he’s a great guy!”

Do you think The Foxes will hold on and win the Prem?

Robben says: “It all depends on them. It gets more and more difficult toward the end because of pressure. Before nobody was speaking about Leicester, but I think they’re ready!”

Are you a fan of their Player Of The Year Riyad Mahrez?

Robben says: “From what I’ve seen and heard he looks a talented player. Because they’re doing so well, other clubs will be hunting. As a team the way they play is impressive!”

If you had to pay to watch one Prem player, who would it be?

Robben says: “There are a few, like the one you just mentioned at Leicester. You come to the stadium to watch these skilful players – Eden Hazard from Chelsea is another!”

What have you made of fellow Dutchman Memphis Depay?

Robben says: “He’s talented, but you can’t underestimate how big a step-up it is to the Premier League, and especially to a big club like Man. United. He’s still young – give him time!”

Did you know? Arjen is approaching a century of caps for Holland – he’s played 88 times and scored!

Find out why Suarez is the world’s best player

Plus there’s a free pack of Match Attax Extra cards