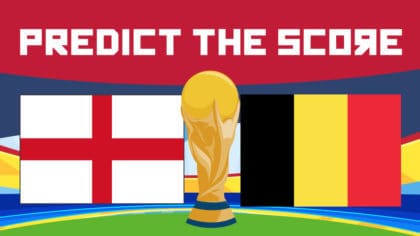 The World Cup is well underway in Russia and we want to know if you can predict the scores of England games!

We already asked you to predict the score of England’s first and second games with Tunisia and Panama.

You said England would win against Tunisia, 3-0. The actual score was 2-1.

And you said England would win against Panama, 2-1. The actual score was 6-1!

You can watch the game on ITV and get special updates on the Fun Kids breakfast show, every morning at 07:20 and 08:20!

We asked you what you thought the score would be and you said 3-3!

Even the presenters have been getting in on the action…

Bex and Dan both think there will be a draw whilst Sean thinks England will win 3-1.

Robot reckons the game will be really close too! He’s predicting a draw.