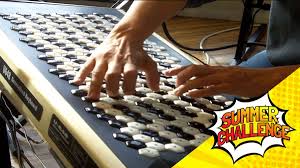 The only time you might listen to foreign music is when Eurovision is on the telly!

Eurovision is a little bit like X Factor or Britain’s Got Talent. It’s big song contest involving loads of countries in Europe that all come together for one big showdown.

Well, there are a lot more countries than those featured on Eurovision and a lot, lot more music!

Today, we’re going to be listening to some music from other countries!

A lot of music sounds very similar. That’s usually because it’s made in English for big countries like America and the U.K.

Even songs that come from other countries, like Gangnam Style, sound familiar.

Gangnam Style is K-Pop, a type of pop-music from South Korea. If you listen carefully, you can hear some English words and phrases!

In the West, our musical scale basically has seven notes. A, B, C… all the way to G. Every song you listen to uses these notes so they’re pretty good.

But in Eastern countries like India, they don’t do that. This is ‘microtonal music’ and it contains literally thousands more sounds!

It sounds funny to us because we’re not used to hearing so many more sounds!

It’s always really good to see what differences there are between cultures.

One really good album is called Calling All Dawns. It’s a mixture of classical music and uses the languages of other countries!

In Poland, pop music is called klasyczna! And you can ask what bands someone likes by asking them: Które zespoty lubiz?

You can find out more Polish words and phrases to do with music by watching the video below!

Visit the Learn Polish series to find out more

We want you to find some examples of foreign music yourself. Maybe what you hear will use a different scale too.

Let us know what you’re listening to in the comments below!

Playing: twist and shout by chakademus and pliers