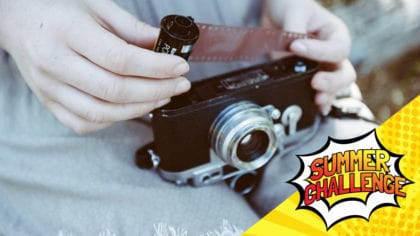 Did you know there are loads of different types of photography?

It’s true! You’re probably most familiar with digital photography. That’s basically photographs taken on anything digital, like a phone or a big fancy DSLR camera.

However, there are other types of photography and none of them are very old…

How does a digital camera work?

Digital cameras use arrays of electronic photodetectors to capture images focused by a lens. That sounds super confusing but it’s actually quite simple.

A photodetector is a type of sensor that detects light and converts it into information.

The information is then read by clever computer chips that turn it into a pretty image!

The first digital camera was invented by NASA in 1965 but ordinary people really started using digital cameras in the mid-to-late 1990’s.

A massive 1.2 trillion photos will be taken this year with 85% of them being done on smartphones!

What is analogue photography?

Analogue photography has been around even longer than digital and that has loads of different branches.

In the same way you can take a digital photo on your phone, camera or computer, you can also take analogue photos in a whole load of different ways.

The most common way is on photographic film which is a type of plastic that goes into cameras.

Photographic film works in a similar way to a digital camera’s sensors. Basically, when you take a photo, the tiny square of plastic is exposed to light and all of the information is ‘saved’ there.

The plastic is coated in chemicals and the information is saved in the form of a chemical reaction!

Unlike digital photography, your image isn’t available straight away. Now, film is light sensitive – it reacts to light – so you have to finish the roll of film before you can see what’s on it.

You take the film to a developing lab, where it’s processed and your photos are printed!

This is all really cool but did you know you don’t even need a proper camera to take amazing photos?

It’s true! In fact, you can take a photo with just a cardboard box! This type of camera is called a pinhole camera and here’s how it works.

Basically, you get a big cardboard box and some photographic paper.

The paper is similar to film in that it’s light sensitive. When you load the box, you need to do it in total darkness!

Then you create a tiny hole – a pin hole – in the front of the box and cover it with some tape.

Take your box out into the wild and go photographing!

You can take one photo with your pinhole camera and because the hole is so small, you might have to wait a very long time before you cover the hole back up.

Here are some really cool pinhole photos some people have taken!

Have you used a pinhole camera before? Maybe you’ve got a kit that helps you build one!

Have you taken an amazing digital photo and want the whole wide world to see it!