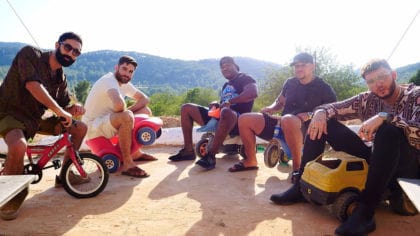 James Arthur has joined forces with Rudimental for this huge new tune!

It’s called Sun Comes Up and it’s the perfect track for the end of the summer holidays.

Check out the video below (not much happens but it’s a pretty sunrise!)

Rudimental are a dance group from London, formed of Piers, Amir, Kesi and DJ Locksmith.

You might know their songs Waiting All Night and Feel The Love.

The guys are always working with amazing singers – and we think James’ voice is made for this song!

James won The X Factor back in 2012, the same year that Union J and Ella Henderson were on the show.

He returned to making music this year and had a massive hit with Say You Won’t Let Go.

This is actually the first time he’s made a dance song – not bad for a first effort!

We’ve just added Sun Comes Up to the Fun Kids Radio playlist so you listen in and you might hear us playing it!

Playing: before you go by lewis capaldi