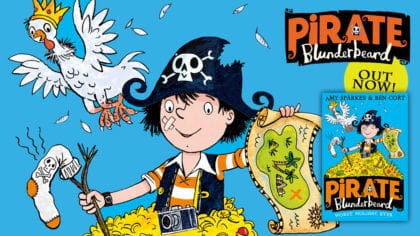 Uh oh, Pirate Blunderbeard has been sent to the Island of No Return!

Rumour has it that somewhere on the island is a MASSIVE hoard of treasure, but no one has ever returned to say for sure…

Pirate Blunderbeard’s stupid brother has tricked him into the worst. holiday. ever!

If he can find the massive treasure trove, his brother will come and pick him up. If not… tough!

All he has to do is follow a treasure map through a jungle full of pirate-eating creatures, into the deepest, darkest probably-haunted cave…

Will he make it?

Worst. Holiday. Ever. is the second Pirate Blunderbeard book, written by Amy Sparkes. Her picture books have been shortlisted for loads of awards, including the Roald Dahl Funny Prize 2013!