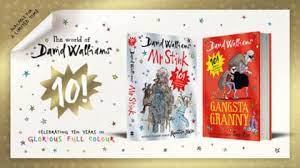 Calling all Gangsta Grannies and Mr Stinks – it’s ten years since David Walliams released his first book, The Boy in the Dress!

To celebrate his tenth anniversary, the bestselling author has re-released Gansta Granny and Mr Stink as special anniversary editions.

They’ve got brand new foil covers so they’ll really stand out on your bookshelf at home and make every other book look really dull and boring!

They’ve also got full-colour illustrations in for the first time ever. The books are illustrated by Quentin Blake and Tony Ross, respectively.

Mr Stink is all about not judging other people by the way they look. In the story, Chloe meets Mr Stink, the local tramp, and decides to hide him in the garden shed.

Chloe’s got to make sure no one finds out about Mr Stink, who’s hiding at the end of her garden! Speaking of secrets, there just might be more to Mr Stink than meets the eye…

Meanwhile, Gangsta Granny‘s the funny story all about an innocent looking Grandma who turns out to be an international jewel thief!

All her life, she has been plotting to steal the Crown Jewels, and now she needs her grandson’s help!

Together, they go on hilarious adventures as Granny tries to steal the most valuable and protected object in the whole country!

Mr Stink and Gangsta Granny will be out on the 8th March.

They’ll be followed by Grandpa’s Great Escape on the 26th July and The Boy in the Dress on 1st November!